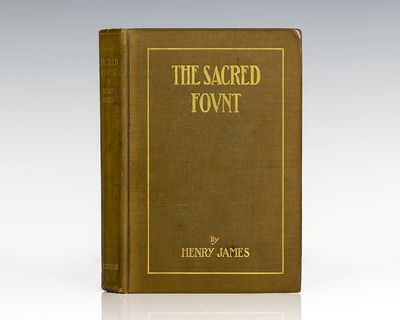 by James, Henry
New York: Charles Scribner's Sons, 1901. First edition of this parable of how people shape appearances into an explanation of an impossibly complex world. Octavo, original cloth, gilt titles to the spine, front panel. Contemporary bookplate, in near fine condition with light toning. The Sacred Fount is a novel by Henry James, first published in 1901. This strange, often baffling book concerns an unnamed narrator who attempts to discover the truth about the love lives of his fellow-guests at a weekend party in the English countryside. He spurns the "detective and keyhole" methods as ignoble, and instead tries to decipher these relationships purely from the behavior and appearance of each guest. He expends huge resources of energy and ingenuity on his theories, much to the bemusement of some people at the party. The narrator speculates upon the relationships between house guests at a weekend party. John Lyon's introduction discusses how the story grew away from James, becoming a curiously intimate revelation of his interests and methods. (Inventory #: 78022)
$125.00 add to cart or Buy Direct from
Raptis Rare Books
Share this item