Writings of Thomas Paine: Secretary for Foreign Affairs to the Congress of the United States of America, in the Late War. 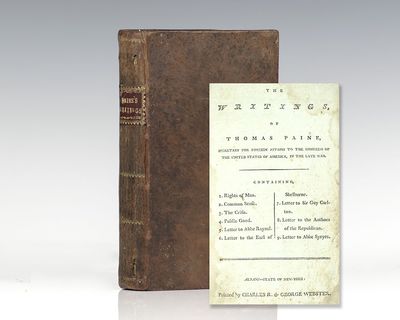 by Paine, Thomas
Albany, New York: Charles R. & George Webster, 1792. Nine of Paine's writings gathered, each pagination with a separate title page. Octavo, bound in contemporary calf. One of at least four issues with variant title pages for this work, this apparently the first, without the addition of "Rights of Man, Part the Second. In very good condition with some light foxing. Rare and desirable. One of the founding fathers of the United States, Thomas Paine authored two of the most influential pamphlets at the start of the American Revolution, which ultimately inspired the 1776 Declaration of Independence. Virtually every American rebel read Paine's powerful pamphlet Common Sense which crystallized the American Revolution and demand for independence from Britain. John Adams asserted "without the pen of the author of Common Sense, the sword of Washington would have been raised in vain." (Inventory #: 81112)
$8,800.00 add to cart or Buy Direct from
Raptis Rare Books
Share this item