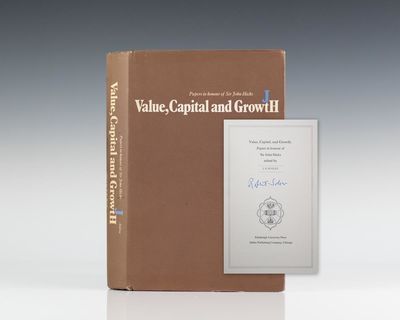 by Hicks, John R.
Edinburgh: Edinburgh University Press, 1968. First edition. Octavo, original cloth. Signed by John Hicks and twice by Robert Solow, who contributed an article in this volume. Fine in a near fine dust jacket with light shelfwear. Edited by J.N. Wolfe. John R. Hicks's early work as a labour economist culminated in The Theory of Wages still considered standard in the field. He collaborated with R.G.D. Allen in two seminal papers on value theory published in 1934. His magnum opus is Value and Capital published in 1939. The book built on ordinal utility and mainstreamed the now-standard distinction between the substitution effect and the income effect for an individual in demand theory for the 2-good case. It generalized the analysis to the case of one good and a composite good, that is, all other goods. It aggregated individuals and businesses through demand and supply across the economy. It anticipated the aggregation problem, most acutely for the stock of capital goods. It introduced general equilibrium theory to an English-speaking audience, refined the theory for dynamic analysis, and for the first time attempted a rigorous statement of stability conditions for general equilibrium. In the course of analysis Hicks formalized comparative statics. In the same year, he also developed the famous "compensation" criterion called Kaldor-Hicks efficiency for welfare comparisons of alternative public policies or economic states. Hicks's most familiar contribution in macroeconomics was the Hicks-Hansen IS-LM model, which formalized an interpretation of the theory of John Maynard Keynes. The model describes the economy as a balance between three commodities: money, consumption and investment. Hicks himself did not embrace the theory as he interpreted it; and, in a paper published in 1980, Hicks asserted that it had omitted some crucial components of Keynes's arguments, especially those related to uncertainty. (Inventory #: 5798)
$1,800.00 add to cart or Buy Direct from
Raptis Rare Books
Share this item