The Education of a Baseball Player. 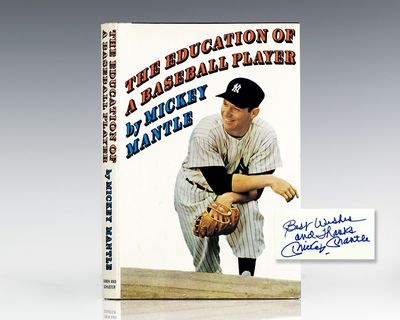 by Mantle, Mickey
New York: Simon & Schuster, 1967. First edition of Mantle's first book. Octavo, original cloth, illustrated. Boldly signed by the author, "Best wishes and thanks Mickey Mantle." Fine in a near fine dust jacket. Signed first editions are rare. Mickey Mantle was a professional baseball player, who played his entire career with the New York Yankees as a center fielder and first baseman, from 1951 through 1968. Mantle was one of the best players and sluggers, and is regarded by many as the greatest switch hitter in baseball history. Mantle was inducted into the National Baseball Hall of Fame in 1974 and was elected to the Major League Baseball All-Century Team in 1999. (Inventory #: 79754)
$1,250.00 add to cart or Buy Direct from
Raptis Rare Books
Share this item