Eloise: A Book for Precocious Grown ups, Eloise in Paris, Eloise at Christmastime. 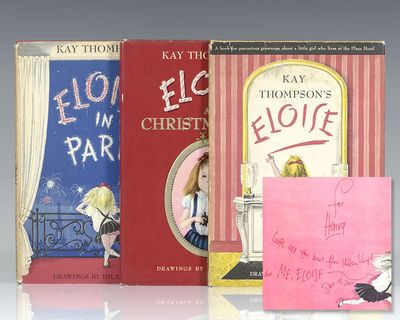 by Thompson, Kay. Illustrated by Hilary Knight
New York: Simon & Schuster, 1955-1958. First editions of the first three books in Kay Thompson's beloved Eloise series. Quartos, 3 volumes, pictorial endpapers, illustrated. Each volume lengthily inscribed by illustrator Hilary Knight, "for Henry with all the best from Hilary Knight and ME, ELOISE Dec 15 2007" on the front free endpaper of Eloise: A Book for Precocious Grown ups; "for Henry from Hilary Knight Dec 15 '07" on the verso of the front free endpaper of Eloise in Paris; and "for Henry! from Hilary Knight and ME, ELOISE!" on the front free endpaper of Eloise at Christmastime. Each volume is near fine in a very good dust jacket with light rubbing and wear. Rare and desirable. American author, singer, and actress Kay Thompson began her career in the early 1930s as a choral director for radio and went on to become MGM Studios' top vocal arranger and coach to such stars as Judy Garland, Lena Horne, and Frank Sinatra. A resident of The Plaza Hotel in New York City, she became most notable for authoring the Eloise series of children's books, rumored to be inspired by the capers of her goddaughter, Liza Minnelli, daughter of personal friend Judy Garland and director Vincente Minnelli. Thomspon collaborated with American illustrator Hilary Knight to create the whimsical black, pink, and white theme that became a trademark of the illustrated series. All four books in the original series were bestsellers upon release, adapted into television projects, and a fifth installment, Eloise Takes a Bawth, was published posthumously from Thompson's original manuscripts. The series became so synonymous with The Plaza that an honorary portrait of Eloise was hung in the hotel's Palm Court and both an Eloise Suite and Eloise Menu have become special features at The Plaza. (Inventory #: 92481)
$4,500.00 add to cart or Buy Direct from
Raptis Rare Books
Share this item