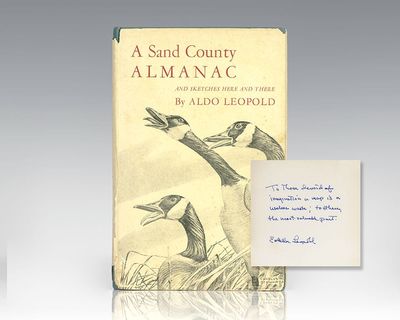 by Leopold, Aldo; Estella Leopold
New York: Oxford University Press, 1949. First edition, first issue of this landmark in the conservation movement. Octavo, original cloth with titles and tooling to the front panel in silver. A lengthy inscription from Estella Leopold on the front free endpaper which reads, "To those devoid of imagination a map is a useless waste; to to others the most valuable part Estella Leopold." Illustrated by Charles W. Schwartz. Housed in a custom half morocco clamshell box. Rare, especially with such a nice inscription. Published in 1949, shortly after the author's death, A Sand County Almanac is a classic of nature writing, widely cited as one of the most influential nature books ever published. Writing from the vantage of his summer shack along the banks of the Wisconsin River, Leopold mixes essay, polemic, and memoir in his book's pages. In one famous episode, he writes of killing a female wolf early in his career as a forest ranger, coming upon his victim just as she was dying, "in time to watch a fierce green fire dying in her eyes.... I was young then, and full of trigger-itch; I thought that because fewer wolves meant more deer, no wolves would mean hunters' paradise. But after seeing the green fire die, I sensed that neither the wolf nor the mountain agreed with such a view." The book has had immense popular influence and has been described as: "one of the benchmark titles of the ecological movement", "a major influence on American attitudes toward our natural environment", "recognized as a classic piece of outdoor literature, rivaling Thoreau's Walden" (Don Meredith). Near fine in a good dust jacket with wear and tear. (Inventory #: 89542)
$6,800.00 add to cart or Buy Direct from
Raptis Rare Books
Share this item