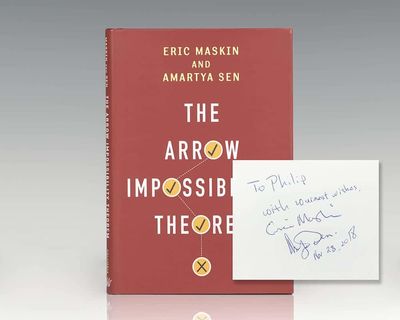 by Arrow, Kenneth; Eric Maskin; Amartya Sen; Joseph Stiglitz and Partha Dasgupta
New York: Columbia University Press, 2014. First edition of this work which explores Kenneth Arrow's impossibility theorem. Octavo, original boards. Presentation copy, signed by both Eric Maskin and Amartya Sen on the front free endpaper, "For Philip with warmest wishes, Eric Maskin." Signed Amartya Sen Nov 28, 2018." Fine in a fine dust jacket. Jacket design by Noah Arlow. Kenneth J. Arrow's pathbreaking "impossibility theorem" was a watershed innovation in the history of welfare economics, voting theory, and collective choice, demonstrating that there is no voting rule that satisfies the four desirable axioms of decisiveness, consensus, nondictatorship, and independence. Nobel Prize-winning economists Eric Maskin and Amartya Sen explore the implications of Arrow's theorem. Sen considers its ongoing utility, exploring the theorem's value and limitations in relation to recent research on social reasoning, and Maskin discusses how to design a voting rule that gets us closer to the ideal-given the impossibility of achieving the ideal. The volume also contains a contextual introduction by social choice scholar Prasanta K. Pattanaik and commentaries from Joseph E. Stiglitz and Kenneth J. Arrow himself, as well as essays by Maskin, Dasgupta, and Sen outlining the mathematical proof and framework behind their assertions. (Inventory #: 71980)
$600.00 add to cart or Buy Direct from
Raptis Rare Books
Share this item