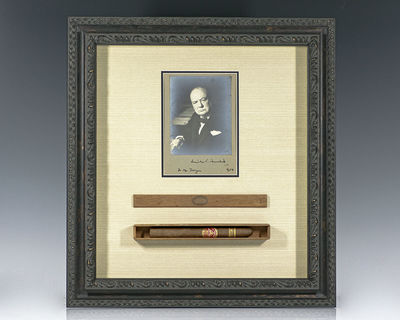 by Churchill, Winston S
1950. Original black and white photograph of Winston S. Churchill inscribed by him and accompanied by an exceptionally rare unsmoked Winston S. Churchill brand La Corona Cigar with the original box. The mounted photograph measures 7 inches by 5 inches and is inscribed by Churchill, "For Mrs. Dorgan, Winston S, Churchill 1950." The recipient, Mary Dorgan was the Churchill's governess through the 1940s and into the 1950s. The cigar measures 7.5 inches in length and bears the original red and gold "La Corona Winston S. Churchill Habana" label. The entire piece measures 19 inches by 19 inches. Unsmoked Winston Churchill cigars alone are exceptionally rare, this, a personal gift from Churchill to his governess is of the utmost rarity. Throughout the majority of his political career, Winston S. Churchill was inseparable from his cigars, there are few informal photographs that show him without one. Churchill's love of cigar smoking began with a visit to Havana in November of 1895 and led him to develop relationships with a number of regular suppliers of Cuban cigars, his favorites being Romeo y Julieta and the now-defunct La Aroma de Cuba. Churchill was known to stock between 3,000 and 4,000 cigars, mainly Cuban, in a room adjacent to his study in his country home in Kent, Chartwell Manor. As one of his valets, Roy Howells, wrote in his biography Simply Churchill, "It took me a little while to get used to the fact that in two days his cigar consumption was the equivalent of my weekly salary." The first 'Winston S. Churchill' banded cigars were produced by New York businessman Samuel M. Kaplan, a great supporter of Churchill who resolved to keep the Prime Minister supplied with Cuban Cigars after his historic stand against Nazi Germany. Kaplan's first gift was a batch of La Coronas bearing the Churchill band delivered to Churchill at the British Embassy in Washington. Churchill also received gifts in the form of cigars from the Cuban government, Cuban patron Antonio Girauder, and tens of thousands of well-wishers. British importers Peter and David Knight received consent from the Churchill Estate in the late 1950s to begin production of the Winston S. Churchill brand cigar, which was contracted to Romeo y Julieta of Havana and remains a popular brand to this day. (Inventory #: 101686)
$28,000.00 add to cart or Buy Direct from
Raptis Rare Books
Share this item