We’re Going On A Bear Hunt. 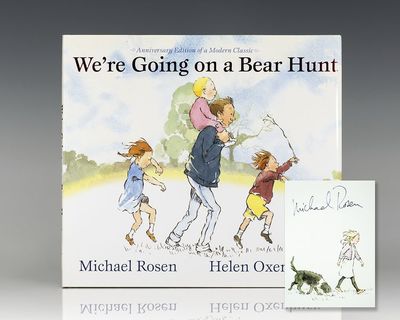 by Rosen, Michael; Illustrated by Helen Oxenbury
New York: McElderry Books, 2009. First edition of the 20th Anniversary edition of this modern children's classic. Oblong quarto, original illustrated glossy boards. Signed by Michael Rosen opposite the title page. Fine in a fine dust jacket. Illustrated by Helen Oxenbury. We're Going on a Bear Hunt was adapted from an American folk song. Rosen, who heard the song, incorporated it in his poetry shows and subsequently wrote the book based upon it. It went on to win the overall Nestle Smarties Book Prize in 1989 and also won the 0-5 years category. In 1989 it was an 'Honor Book' in the Boston Globe-Horn Book Awards. The book also won the 'School Library Journal Best Book of the Year' and the 'Mainichi Newspapers Japanese Picture Book Award, Outstanding Picture Book from Abroad' award. Since publication, the book has sold more than 9 million copies. It has won numerous awards and was the subject of a Guinness World Record for "Largest Reading Lesson" with a book-reading attended by 1,500 children, and an additional 30,000 listeners online, in 2014. (Inventory #: 62009)
$450.00 add to cart or Buy Direct from
Raptis Rare Books
Share this item