Philosophy and the Mirror of Nature. 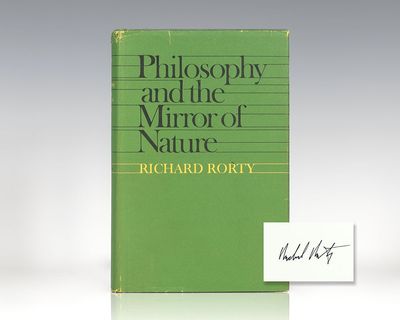 by Rorty, Richard
Princeton: Princeton University Press, 1979. First edition of this classic work of twentieth century philosophy. Octavo, original cloth. Signed by Richard Rorty on the half-title page. Fine in a near fine dust jacket. This is the first signed example we have seen or handled of this landmark work. When it first appeared in 1979, Philosophy and the Mirror of Nature hit the philosophical world like a bombshell. In it, Richard Rorty argued that, beginning in the seventeenth century, philosophers developed an unhealthy obsession with the notion of representation: comparing the mind to a mirror that reflects reality. Rorty's book is a powerful critique of this imagery and the tradition of thought that it spawned. "This is an ambitious and important book. Ambitious because it attempts to place the main concerns and discussions of contemporary philosophy within a historical perspective; important because this is all too rarely attempted within our present philosophical culture, and almost never done this well" (Charles Taylor, Times Literary Supplement). (Inventory #: 84533)
$4,500.00 add to cart or Buy Direct from
Raptis Rare Books
Share this item