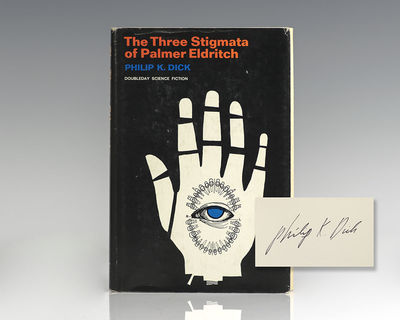 by Dick, Philip K
Garden City, NY: Doubleday and Company, Inc, 1965. First edition of Dick's classic novel, which was nominated for the Nebula Award for Best Novel in 1965. Octavo, original cloth. Signed by Philip K. Dick. Fine in near fine dust jacket. Jacket design by Tom Chibbaro. Exceptionally rare signed. Algis Budrys of Galaxy Science Fiction described the novel as "an important, beautifully controlled, smoothly created book which will twist your mind if you give it the least chance to do so". He praised Dick's accomplishment, saying "the whole creation resonates to the touch of the only present science-fiction writer who could possibly have done it" and characterizes the result as "a witty, sometimes lighthearted, and always fascinating piece of fiction". Budrys later named the book the best science-fiction novel of his first year as reviewer for the magazine, reporting that others "are calling it some kind of half-conscious failure." (Inventory #: 101458)
$22,000.00 add to cart or Buy Direct from
Raptis Rare Books
Share this item