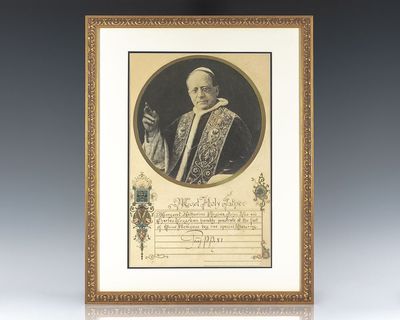 by Pope Pius XI. (Ambrogio Damiano Achille Ratti)
c. 1930. Rare hand-illuminated apostolic benediction signed by Pope Pius XI with a circular portrait of him. The blessing in elaborate script reads, "Most Holy Father, Margaret, Katherine, Regina, John, Leo and Charles Lougrhan, humbly prostrate at the feet of Your Holiness beg one special blessing." Signed by the pope at the conclusion, "Pope PP. XI." In near fine condition. Double matted and framed. The entire piece measures 24 inches by 19 inches. Uncommon signed by Pope Pius XI. Pope Pius XI was head of the Catholic Church from February 6, 1922 until his death in 1939. The first sovereign of Vatican City from its establishment as an independent state, Pope Pius XI issued numerous encyclicals warning of the dangers of capitalistic greed, communism, and anti-clericalism. Upon his death in 1939, he was buried in the Papal Grotto of Saint Peter's Basilica; during the excavation to create his tomb, ancient burial grounds were uncovered which revealed bones now venerated as the bones of St. Peter. (Inventory #: 88158)
$2,500.00 add to cart or Buy Direct from
Raptis Rare Books
Share this item