Economics In One Lesson. 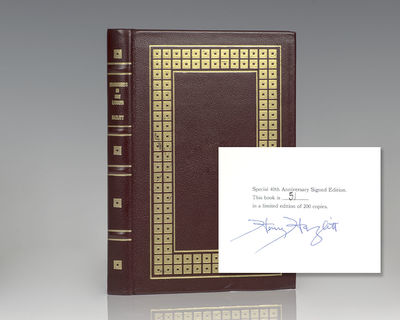 by Hazlitt, Henry
New York: Laissez Faire Books, 1986. Signed limited edition of the author's seminal work, one of 200 numbered copies, this is number 51. Octavo, original bound in original full leather, gilt titles and tooling to the spine, gilt tooling to the front and rear panels, all edges gilt, ribbon bound in. In fine condition. Considered among the leading economic thinkers of the "Austrian School," Henry Hazlitt was a philosopher, an economist, and a journalist. He was the founding vice-president of the Foundation for Economic Education and an early editor of The Freeman magazine, an influential libertarian publication. Economics in One Lesson was praised upon publication, and has since sold over one million copies. "It is a brilliant performance. It says precisely the things which need most saying and says them with a rare courage and integrity" (F.A. Hayek). "A brilliant and pithy work first published in 1946, at a time of rampant statism at home and abroad, it taught millions the bad consequences of putting government in charge of economic life. College students across America and the world still use it and learn from it. It may be the most popular economics text ever written" (The Von Mises Institute). (Inventory #: 96731)
$1,800.00 add to cart or Buy Direct from
Raptis Rare Books
Share this item