The Iliad and The Odyssey. 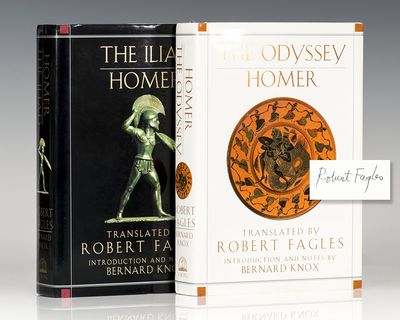 by Homer] Translated by Robert Fagles; Introduction and Notes by Bernard Knox
New York: The Viking Press, 1990 & 1996. First editions, early printings of both The Iliad and The Odyssey of the translation done by Robert Fagles. Octavo, 2 volumes, original cloth, pictorial endpapers, bookmarks bound in. Both volumes are signed by the translator Robert Fagles. Each volume is fine in fine dust jackets. Jacket design by Neil Stuart. Introduction and notes by Bernard Knox. "Sing to me of the man, Muse, the man of twists and turns driven time and again off course, once he had plundered the hallowed heights of Troy." So begins Robert Fagles' magnificent translation of the Odyssey, which Jasper Griffin in The New York Times Review of Books hails as "a distinguished achievement." If the Iliad is the world's greatest war epic, the Odyssey is literature's grandest evocation of everyman's journey through life. Odysseus' reliance on his wit and wiliness for survival in his encounters with divine and natural forces, during his ten-year voyage home to Ithaca after the Trojan War, is at once the timeless human story and an individual test of moral endurance. In the myths and legends that are retold here, Fagles has captured the energy and poetry of Homer's original in a bold, contemporary idiom, and given us an Odyssey to read aloud, to savor, and to treasure for its sheer lyrical mastery. (Inventory #: 59011)
$600.00 add to cart or Buy Direct from
Raptis Rare Books
Share this item