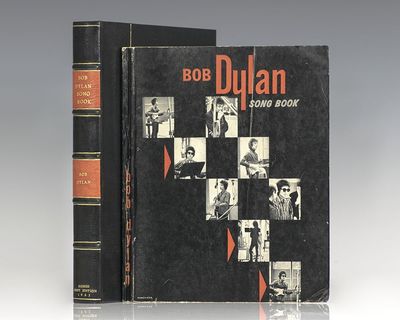 by Dylan, Bob
New York: M. Whitmark & Sons. First edition of this music collection of the songs of Bob Dylan. Quarto, original illustrated wrappers as issued, frontispiece portrait of Dylan after a drawing by Cambert, illustrated. Signed by Bob Dylan on the front free endpaper. Introduction by New York Times folk music critic Robert Shelton. Photographs by Chuck Stewart. In very good condition. Housed in a custom half morocco clamshell box. Dylan's lyrics have incorporated various political, social, philosophical, and literary influences. They defied existing pop music conventions and appealed to the burgeoning counterculture. Initially inspired by the performances of Little Richard, and the songwriting of Woody Guthrie, Robert Johnson, and Hank Williams, Dylan has amplified and personalized musical genres. His recording career, spanning 50 years, has explored the traditions in American song--from folk, blues, and country to gospel, rock and roll, and rockabilly to English, Scottish, and Irish folk music, embracing even jazz and the Great American Songbook. Dylan performs with guitar, keyboards, and harmonica. Backed by a changing line-up of musicians, he has toured steadily since the late 1980s on what has been dubbed the Never Ending Tour. His accomplishments as a recording artist and performer have been central to his career, but songwriting is considered his greatest contribution. Dylan has sold more than 100 million records, making him one of the best-selling artists of all time. He has also received numerous awards including eleven Grammy Awards, a Golden Globe Award, and an Academy Award. Dylan has been inducted into the Rock and Roll Hall of Fame, Minnesota Music Hall of Fame, Nashville Songwriters Hall of Fame, and Songwriters Hall of Fame. The Pulitzer Prize jury in 2008 awarded him a special citation for "his profound impact on popular music and American culture, marked by lyrical compositions of extraordinary poetic power." In May 2012, Dylan received the Presidential Medal of Freedom from President Barack Obama. In 2016 he was awarded the Nobel Prize in literature. (Inventory #: 90802)
$6,500.00 add to cart or Buy Direct from
Raptis Rare Books
Share this item