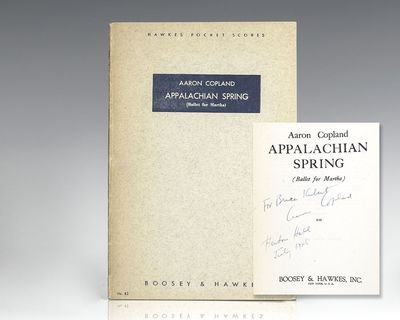 by Copland, Aaron
New York: Boosey and Hawkes, 1945. First edition of the Booksey and Hawkes Pocket Orchestral Score of Copland's Appalachian Spring, one of the most enduring of the twentieth century. Large octavo, original wrappers as issue. Inscribed by the composer on the title page, "For Bruce Kubert Aaron Copland Heaton Hall July 1946." In very good condition with a tear to the front panel. Exceptionally rare and desirable signed and inscribed. Referred to by his peers and critics as "the Dean of American Composers", American composer and conductor Aaron Copland is best known for the works he wrote in the 1930s and 1940s which came to encompass the vast American landscape and pioneer spirit. These "populist" works, which Copeland referred to as his "vernacular" style include the ballets Appalachian Spring, Billy the Kid and Rodeo, his Fanfare for the Common Man and Third Symphony. Appalachian Spring premiered in 1944 and has achieved widespread and enduring popularity as an orchestral suite. The ballet, scored for a thirteen-member chamber orchestra, was created upon commission of choreographer and dancer Martha Graham with funds from the Coolidge Foundation. It premiered on Monday, October 30, 1944 at the Library of Congress in Washington D.C., with Martha Graham dancing the lead role. The set was designed by the American sculptor Isamu Noguchi. Copland was awarded the 1945 Pulitzer Prize for Music. (Inventory #: 96244)
$5,800.00 add to cart or Buy Direct from
Raptis Rare Books
Share this item