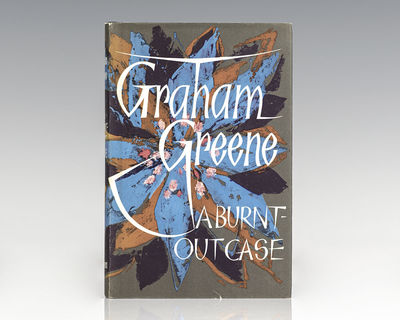 by Greene, Graham
London: Heinemann, 1961. First edition of this Greene novel set in a leproserie on the upper reaches of a tributary of the Congo River in Africa. Octavo, original cloth. Small name to the front free endpaper, near fine in a fine dust jacket. Dust jacket design by Lacey Everett. An exceptional example. Greene dedicated A Burnt-Out Case to Docteur Michel Lechat, a medical doctor at a leper colony in Yonda in Africa (one of a number of such colonies Greene had visited in the Congo and the Cameroons, which had inspired his novel). In his dedication to Lechat, Greene writes: "Doctor Colin has borrowed from you his experience of leprosy and nothing else. Doctor Colin's leproserie is not your leproserie.... From the fathers of your Mission I have stolen the Superior's cheroots--that is all, and from your Bishop the boat that he was so generous as to lend me for a journey up the Ruki." In reference to the characters in the novel, Greene writes: "It would be a waste of time for anyone to try to identify Querry, the Ryckers, Parkinson, Father Thomas--they are formed from the floatsum of thirty years as a novelist." Commenting on his literary intentions in the work, Greene wrote that it was, "an attempt to give dramatic expression to various types of belief, half-belief, and non-belief, in the kind of setting, removed from world-politics and house-hold-preoccupations, where such differences are felt acutely and find expression." Drawing a comparison between a leper-colony doctor's work and that of a novelist, Greene adds: "A doctor is not immune from 'the long despair of doing nothing well", the same "cafard that hangs around a writer's life." (Inventory #: 104522)
$475.00 add to cart or Buy Direct from
Raptis Rare Books
Share this item