The World, The Flesh and the Devil. 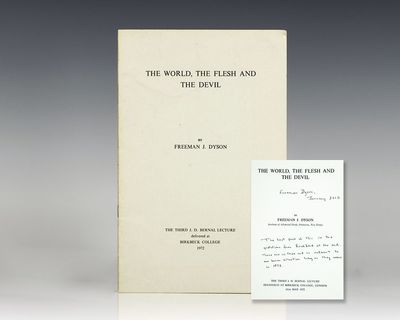 by Dyson, Freeman J
London: Birbeck College, 1972. First edition of this lecture given by Dyson at Birbeck College in London on May 16, 1972. Octavo, original wrappers as issued. Signed by the author on the title page with an added note regarding this lecture, which reads: "The best part of this is the quotations from Bradford at the end. These are as true and relevant to our human situation today as they were in 1972. Freeman Dyson January 2010." In near fine condition. Rare and desirable signed and with notes by Dyson. English-born American theoretical physicist and mathematician is best known for his work in quantum electrodynamics, solid-state physics, astronomy and nuclear engineering. He was professor emeritus in the Institute for Advanced Study in Princeton, a member of the Board of Visitors of Ralston College and a member of the Board of Sponsors of the Bulletin of the Atomic Scientists. (Inventory #: 62076)
$1,200.00 add to cart or Buy Direct from
Raptis Rare Books
Share this item