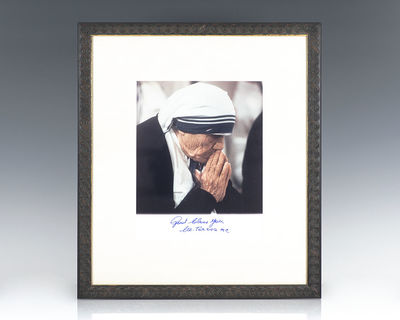 signed first edition
by Mother Teresa
Color photograph portrait of Mother Teresa with her hands clasped in prayer boldly signed, "God bless you, M. Teresa mc." In fine condition. Matted and framed. The photograph measures 10 inches by 8 inches. The entire piece measures 17 inches by 15 inches. An iconic photograph of Mother Teresa, rare and desirable and signed. Mother Teresa founded the Missionaries of Charity, a Roman Catholic religious congregation, which by 2012 consisted of over 4,500 sisters and was active in 133 countries. They run hospices and homes for people with HIV/AIDS, leprosy and tuberculosis; soup kitchens; dispensaries and mobile clinics; children's and family counselling programs; orphanages; and schools. Members must adhere to the vows of chastity, poverty, and obedience, as well as a fourth vow, to give "wholehearted free service to the poorest of the poor." Mother Teresa was the recipient of numerous honors, including the 1979 Nobel Peace Prize. In October 2003, she was beatified as "Blessed Teresa of Calcutta." (Inventory #: 98753)
$5,600.00 add to cart or Buy Direct from
Raptis Rare Books
Share this item