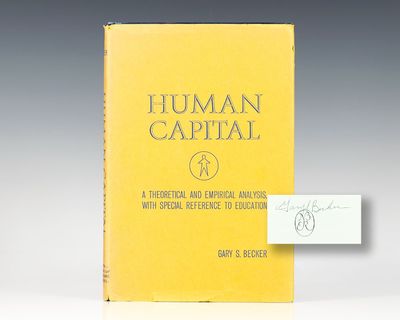 by Becker, Gary S
New York: National Bureau of Economic Research, 1966. First edition, second printing of the economist's magnum opus. Octavo, original cloth. Signed by Gary Becker on the title page. Fine in a near fine dust jacket. Rare signed. Human Capital is Becker's classic study of how investment in an individual's education and training is similar to business investments in equipment. Recipient of the 1992 Nobel Prize in Economic Science, Gary S. Becker is a pioneer of applying economic analysis to human behavior in such areas as discrimination, marriage, family relations, and education. Becker's research on human capital was considered by the Nobel committee to be his most noteworthy contribution to economics. (Inventory #: 42091)
$1,600.00 add to cart or Buy Direct from
Raptis Rare Books
Share this item