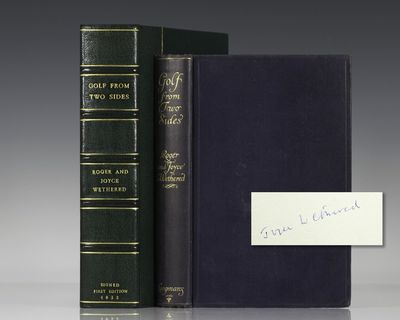 by Wethered, Roger and Joyce
London: Longman's, Green, and Co, 1922. First edition of this work by the Wethereds. Octavo, original cloth, illustrated with twenty-eight illustrations. Signed by Joyce Wethered on the title page. In near fine condition. Housed in a custom half morocco clamshell box. Rare signed. Joyce Wethered was a golfer widely regarded as the greatest British woman player of all time. Joyce learned the game as a child, as did her brother Roger, who lost a playoff for the 1921 Open Championship. Joyce won the British Ladies Amateur four times (1922, 1924, 1925, and 1929) and the English Ladies' champion for five consecutive years (1920-24). (Inventory #: 29009)
$2,800.00 add to cart or Buy Direct from
Raptis Rare Books
Share this item