Put Money In Thy Purse: A Diary of the Film Othello. 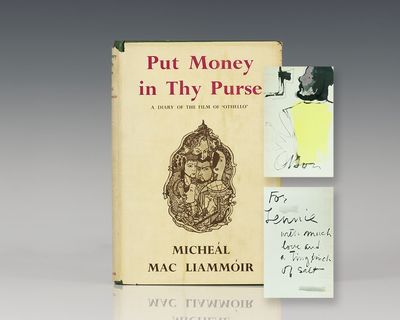 by Mac Liammoir, Michael; Preface by Orson Welles
London: Methuen, 1952. First edition of this work on the film Othello. Octavo, original cloth, frontispiece of Welles as Othello. Association copy, inscribed by Orson Welles and with a painting (self-portrait) done by him across the front endpaper and the front pastedown of a self-portrait of Welles in black, purple and yellow paint and is inscribed "For Lennie with much love and a tiny pinch of salt Orson." The recipient, New York Post columnist Leonard Lyons was an early champion of Welles and the two were close friends for decades. Near fine in a very good dust jacket. Rare and desirable with such a warm inscription by one of the finest actors of the twentieth century. Othello is a 1951 drama film directed and produced by Orson Welles, who also adapted the Shakespearean play and played the title role. Recipient of the Palme d'Or at the 1952 Cannes Film Festival, the film was distributed by United Artists when it was released in the United States in 1955. Othello was filmed on location over a three-year period in Morocco, Venice, Tuscany and Rome and at the Scalera Studios in Rome. In addition to Orson Welles, the cast consisted of Micheal MacLiammoir as Iago, Robert Coote as Roderigo, Suzanne Cloutier as Desdemona, Michael Laurence as Cassio, Fay Compton as Emilia and Doris Dowling as Bianca. (Inventory #: 43050)
$7,800.00 add to cart or Buy Direct from
Raptis Rare Books
Share this item