Howl, for Carl Solomon. Mimeographed for the Six Gallery Reading. 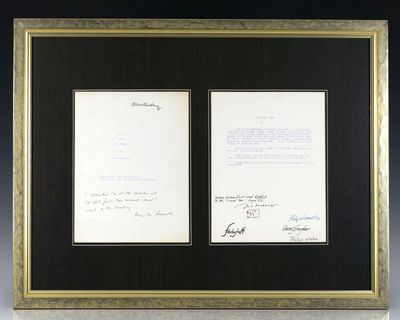 signed first edition
by Ginsberg, Allen
Two sheets from an exceptionally rare privately produced mimeographed printing of Howl, preceding the first edition. One of 25 copies printed on rectos only in purple ink typed by the poet Robert Creeley and printed by Marthe Rexroth at S.F State, where she was a secretary, for the famous Six Gallery reading (also known as Six Angels in the Same Performance). This event, which took place at 3110 Fillmore Street in San Francisco on October 7, 1955 was the first important public poetry exhibition heralding the West Coast literary revolution of the Beat Generation. At the reading, five talented young poets--Allen Ginsberg, Philip Lamantia, Michael McClure, Gary Snyder, and Philip Whalen presented some of their latest works. They were introduced by Kenneth Rexroth, who was a kind of literary father-figure for the younger poets. It was at this reading that Allen Ginsberg performed the piece in public, which had been advertised by a postcard proclaiming: "Remarkable collection of angels all gathered at once in the same spot. Wine, music, dancing girls, serious poetry, free satori." The exuberant audience included Neal Cassady, who passed around the wine jug and a collection plate and a drunken Jack Kerouac, who refused to read his own work but cheered the other poets on, and later wrote an account in his novel The Dharma Bums. He fictionalized the event with a description of circulating gallon jugs of California burgundy among the increasingly raucous crowd, "getting them all piffed so that by eleven o'clock when Alvah Goldbrook (Ginsberg's stand-in in the novel) was reading his wailing poem 'Wail' ('Howl') drunk with arms outspread everybody was yelling 'Go! Go! Go!'" Also in attendance was Lawrence Ferlinghetti, who telegrammed Ginsberg the following day offering to publish his work, saying " I greet you at the beginning of a great career. When do I get the manuscript?" He published in 1956 through his City Lights Press, but customs agents seized Howl and Other Poems when it arrived from its London-based printer on grounds that it was indecent and obscene. Ferlinghetti and his store manager Shigeyoshi Murao were acquitted of the obscenity charges in October 1957. The title page is signed by Allen Ginsberg, with the signature and a note by Marthe Rexroth, which reads, "I cranked the ditto master at S F State the first time around -and! was at the reading." On the verso of the title, McClure has written the lengthy note, "This first long poem of Allen's was read at the Six Gallery in San Francisco in October 1955. I was 22 years old and gave my first reading also that night. I read a poem titled FOR THE DEATHS OF 100 WHALES and other poems of nature and new consciousness. Our co-readers that night were Whalen, Snyder, & Lamantia. Kenneth Rexroth was M.C. I met Jack Kerouac that night. The group of us - minus Lamantia - read again in Berkeley, March 1956, on a rainy evening. It was a fine evening for poetry and I remember my pleasure in Allen's comic 'America'. I read mostly from a huge notebook of experimental poems of consciousness. Michael McClure." On the dedication page are the signatures of Philip Lamantia, Gary Snyder, Philip Whalen, Lawrence Ferlinghetti and an inscription by David Meltzer: " When Allen first read Kaddish in SF, I read too. I was 22." Double matted and framed, the entire piece measures 20 inches by 26 inches, with an opening in the back of the frame to view McClure's statement. Only one other similar printing of this edition has surfaced, which fetched $118,750 at auction in 2013, although this copy did include all of the pages. An exceptionally rare item of this important work and cornerstone to American thought and culture. Howl is considered to be one of the principal works of the Beat Generation. His influences included William Carlos Williams and Jack Kerouac and he attempted to speak in a spontaneous voice. The poem relates many of the stories and experiences of Ginsberg's friends and contemporaries, and is noted for its tumbling, hallucinatory style, and the frank address of sexuality, and homosexuality in particular, which was the basis for the obscenity charges. Much of his prompting in writing the poem was his sympathy for Carl Solomon, to whom he dedicated the book. Ginsberg met Solomon in a Psychiatric Hospital after he was arrested for having stolen goods in his apartment and vehicle. The poem uses the phrase "I'm with you in Rockland" as a refrain to each line in the third section. The first section of the poem immortalizes a few of Solomon's personal exploits, such as the line, "...who threw potato salad at CCNY lecturers on Dadaism and subsequently presented themselves on the granite steps of the madhouse with shaven heads and harlequin speech of suicide, demanding instantaneous lobotomy." Ginsberg admitted later this sympathy for Solomon was connected to bottled-up guilt and sympathy for his mother's schizophrenia, who had been lobotomized. When Ginsberg read the poem aloud the day of the Six Gallery reading many considered it the beginning of a new movement, and the reputation of Ginsberg and those associated with the Six Gallery reading spread throughout San Francisco. In response to Ginsberg's reading, McClure wrote: "Ginsberg read on to the end of the poem, which left us standing in wonder, or cheering and wondering, but knowing at the deepest level that a barrier had been broken, that a human voice and body had been hurled against the harsh wall of America.... (Inventory #: 40140)
$38,000.00 add to cart or Buy Direct from
Raptis Rare Books
Share this item