Miners and Travelers' Guide to Oregon, Washington, Idaho, Montana, Wyoming and Colorado Via the Missouri and Columbia Rivers Accompanied by a General Map of the Mineral Region of the Northern Sections of the Rocky Mountains 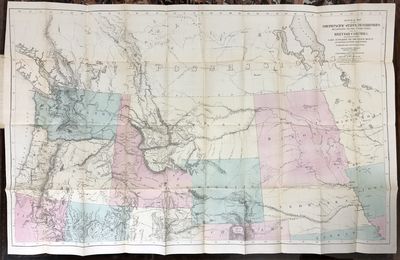 by Mullan, John
New York: Wm. M. Franklin. Good. 1865. First Edition. Hardcover. Original brown cloth boards with gilt lettering on spine; includes hand-colored fold out map titled "General Map of the North Pacific States and Territories Belonging to the United States and of British Columbia, Extending from Lake Superior to the Pacific Ocean and between Latitude 39 and 53 North. Exhibiting Mail Routes, Gold Mines and including the most Recent Surveys of the Topographical Bureau. Prepared by Captain John Mullan, late Superintendent of Northern Pacific Military Wagon Road & Commissioner of the Northern Pacific Rail Road." Map measures 39" X 25" when unfolded. Volume is housed in a modern clamshell box with gilt lettering on spine. Boards have light wear to corners, minor loss at head and foot of spine, gutters are cracked but binding is still tight; endpapers have light chipping, a few leaves have light foxing; map has light toning and a few ¼" or less closed tears at folds, overall very good. "In advising emigrants entering the Pacific Northwest, Captain Mullan furnishes a day-by-day itinerary of the route from Fort Benton, on the Missouri River, through the mountains to Walla Walla in Washington Territory. After these directions he continues with a general description of the resources of the entire region" (Wagner Camp 421a). A nicely preserved copy with a bright, clean map. ; 12mo 7" - 7½" tall; 153 pp . (Inventory #: 019878)
$2000.00 add to cart Available from
Back of Beyond Books
Share this item

Steidl , 2014
(click for more details about Ed Ruscha: Catalogue Raisonné of the Paintings, Volume Six: 1998-2003)
View all from this seller>