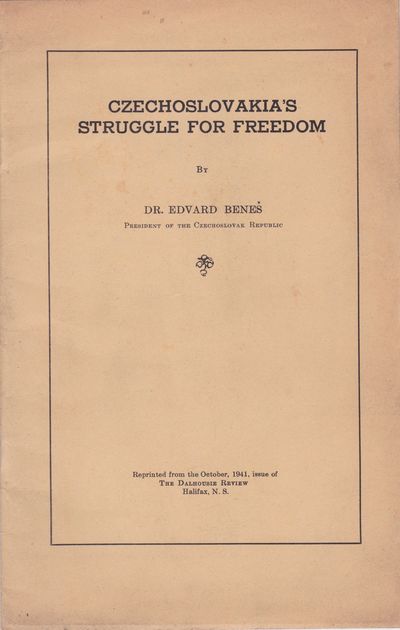 Offprint of an article by Czechoslovakia's president condemning Hitler's occupation of Czechoslovakia. Reprinted from the October 1941 issue of The Dalhousie Review of Halifax, Nova Scotia.

"It is an unconcealed plan of Hitler's Germany to make the subjugated Slavonic nations into a mass of slaves which would be driven from one part of German Europe to another, just as German political and economic interests demanded, and might even be removed from Central Europe entirely and sent to the Urals or Siberia, as has several times been expressly suggested in Nazi publications; they might be simply extirpated, should this be in any way advantageous to the Herrenvolk," President Benes writes.

While this offprint is widely held by institutions, it is scarce in commerce.

CONDITION: Wrappers soiled, staples rusted. Presentation stamp to the title page: "Compliments of Mr. E.J. Hajny, Czechoslovakia Consul / Premiere of the Picture "We Refuse to Die" (The Story of Lidice) at the Telenews Theatre, Cleveland, Ohio." About Very Good. (Inventory #: 2126)
$100.00 add to cart Available from Le Bookiniste
Share this item