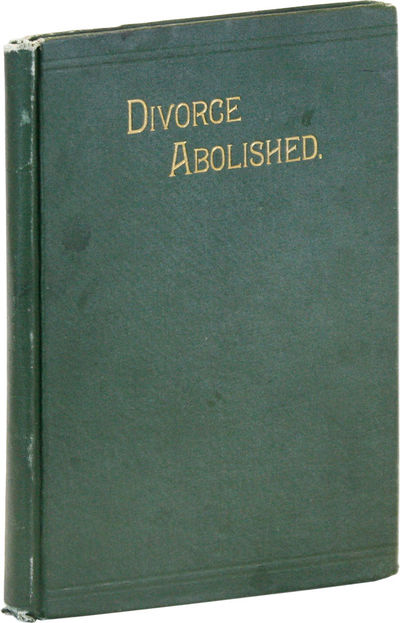 by PALMER, A.J.
New York: Baker & Taylor Company, 1888. Second Edition. Hardcover. Uncommon work of marital advice, the author arguing that divorce will become a thing of the past if unhappy couples would just follow his advice on the most common causes of martial strife and how to abolish them. Palmer describes ten such causes, No. 1 being "The ignorance of women in the conduct of households," but also covers "The lack of sympathy between men and women," "The lack of proper respect, between men and women, for womanly employments," "Lack of business training in women," and, most significantly, "The failure, on the part of the husband, to respect the wife's ownership of herself" (p. 10). Of this final problem, Palmer describes it as "one of the most important causes" but also acknowledges that "this idea is all but new, and indeed really belongs to an age so advanced that it is likely to receive but small support at present." Though the author does not boast of having invented such a concept, he does not provide an attribution. Slim octavo (20cm.); publisher's green gilt-lettered cloth, floral endpapers; 85pp. Boards a bit scuffed at corners and spine ends with brief exposure, small soil spot to upper cover, recent price sticker to front free endpaper, else Very Good and bright. (Inventory #: 46421)
$150.00 add to cart or Buy Direct from
Lorne Bair Rare Books
Share this item