Immediate, Not Gradual Abolition; or, An Inquiry into the Shortest, Safest and Most Effectual Means of Getting Rid of West Indian Slavery 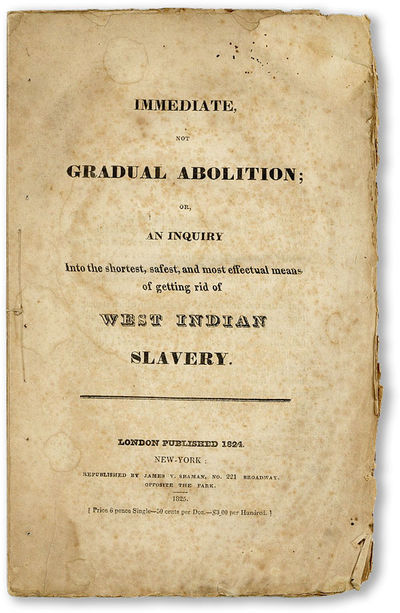 by [AFRICAN AMERICAN HISTORY & LITERATURE] [SLAVERY & ABOLITION] [HEYRICK, Elizabeth, attr.]
New-York: James V. Seaman, 1825. First American Edition. Paperback. Attributed to the EnglishQuaker and abolitionist Elizabeth Heyrick, a pamphlet first published in London the previous year and harshly criticizing the "gradualist" abolitionists who had quite erroneously argued that if the slave trade was abolished, as it was in England in 1808, slavery would eventually die out as well. Heyrick's argument for complete and immediate emancipation was quickly reprinted in the United States as containing "some of the most persuasive appeals, and powerful arguments which we ever met with in relation to slavery" (p. [2]). The author concluded that "abstinence from West Indian sugar alone, would sign the death warrant of West Indian slavery" (p. 24). Though unattributed at the time of publication, the introduction to this edition also notes that the work is "said to be the production of a female in England" and the work "specifically targeted women and their emotions" (Elizabeth J. Clapp and Julie Roy Jeffrey, eds. "Women, Dissent and Anti-Slavery in Britain and America, 1790-1865" (2011), p. 113). DUMOND, p. 65; SHOEMAKER 20877. Octavo (23cm.); side-stitched self-wrappers; 24pp. Wrapper extremities rather chipped, faint dampstaining, the whole foxed and father toned, else Good to Very Good and sound. (Inventory #: 46581)
$750.00 add to cart or Buy Direct from
Lorne Bair Rare Books
Share this item