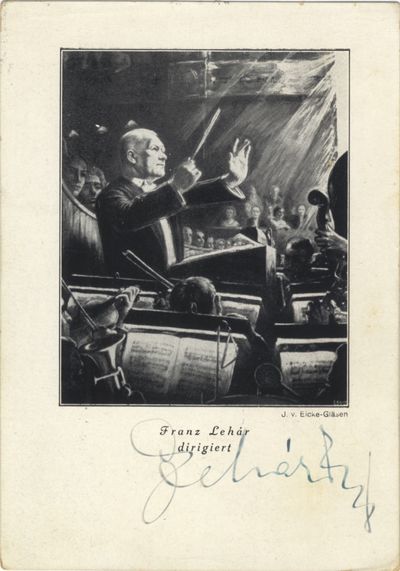 signed
by LEHÁR, Franz 1870-1948
Reproduction of a painting by J. V. Eicke-Gläsen depicting Lehár conducting. Autograph signature ("Lehár") to verso From the collection of the distinguished American mezzo-soprano Marilyn Horne (b. 1934); previously in the collection of Walter Honig. Slightly worn. Franz Lehar was "the leading operetta composer of the 20th century, being primarily responsible for giving the genre renewed vitality. His most successful operetta, Die lustige Witwe, has established a lasting place in the opera as well as the operetta repertory and, along with Offenbach and Johann Strauss II, Lehár has remained one of the most popular composers of light music." Andrew Lamb in Grove Music Online. The Honig family emigrated from Vienna to England in September of 1938 and then to the United States in 1939. The family papers are held at the Holocaust Museum in Washington, D.C. "Horne had a voice of extraordinary range, rich and tangy in timbre, with a stentorian chest register and an exciting top... In concert she once achieved the feat of singing in a single programme Rossini arias and Brünnhilde's Immolation Scene, proof of her exceptional versatility. Throughout her lengthy career she was an admired recitalist, singing lieder, mélodies, and Spanish and American songs with equal aplomb." Alan Blyth in Grove Music Online. (Inventory #: 31824)
$165.00 add to cart or Buy Direct from
J. & J. Lubrano Music Antiquarians
Share this item