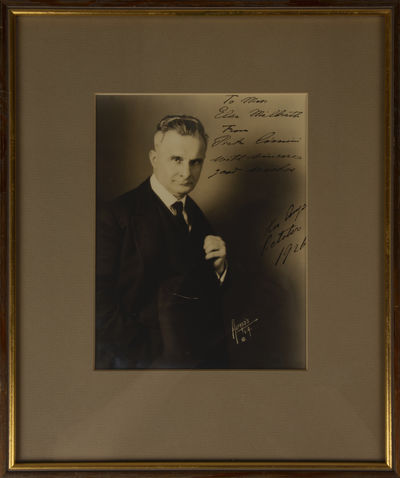 signed
by CIMINI, Pietro 1874-1971
Inscribed "To Miss Elsie Milbrath From Pietro Cimini with sincere good wishes Los Angeles October 1926" and with studio copyright mark "Alfred's L.A." at lower right. Matted, glazed, and framed, image size 213 x 162 mm, overall size 369 x 305 mm. From the collection of the distinguished American mezzo-soprano Marilyn Horne (b. 1934). Italian conductor Pietro Cimini worked under Toscanini at La Scala, then took up posts in Warsaw, Chicago, and throughout California. He directed performances at the San Francisco Opera from 1925 to 1937 and also guest conducted the Hollywood Bowl Orchestra and the Los Angeles Philharmonic. "Horne had a voice of extraordinary range, rich and tangy in timbre, with a stentorian chest register and an exciting top... In concert she once achieved the feat of singing in a single programme Rossini arias and Brünnhilde's Immolation Scene, proof of her exceptional versatility. Throughout her lengthy career she was an admired recitalist, singing lieder, mélodies, Spanish and American songs with equal aplomb." Alan Blyth in Grove Music Online. (Inventory #: 31385)
$110.00 add to cart or Buy Direct from
J. & J. Lubrano Music Antiquarians
Share this item