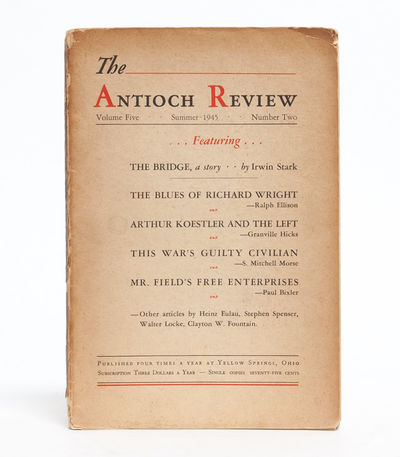 by Ellison, Ralph
Yellow Springs, OH, 1945. First edition. Very Good. In The Antioch Review (V: Summer 1945: 2), pages 198-211. Original printed wrappers with title and selected contents to the front, and adverts to rear wrap. Spine soiled with some chipping to the paper; toning to edges of wraps. Front wrap chipped at upper corner with no paper loss; small closed tear and chipping to top rear wrapper. With the exception of offsetting to pages 198-199, internally clean and unmarked. The first appearance of Ellison's important review of Richard Wright's autobiography Black Boy; it was later re-released as an offprint that occasionally appears on the market. The present format is incredibly scarce. Currently the only copy on the market, it does not appear in the modern auction record. Pre-dating Invisible Man by seven years, Richard Wright's Blues holds an important place among Ellison's early works of literary and social criticism. As a review of Richard Wright's recently released autobiography, it placed Ellison's name in print alongside that of an established African American writer who had brought the post WWII world into contact with black experience. As a piece in the Antioch Review, a quarterly linked to a notoriously progressive and activist college, it positioned Ellison as a cutting edge voice for the rising generation. "As a writer, Richard Wright has outlined for himself a dual role: To discover and depict the meaning of Negro experience and to reveal to both Negroes and whites those problems of a psychological and emotional nature which arise between them when they strive for mutual understanding." With deep appreciation for Wright's mission, Ellison asserts that his literary predecessor's work weaves together influence from across the canon, recalling Joyce, Dostoyevsky, and Rousseau; yet Wright's work is different because it emphasizes a specifically African American experience, one which, like the blues, has "an impulse to keep the painful details and episodes of a brutal experience alive in one's aching consciousness, to finger its jagged grain and to transcend it...an autobiographical chronical of personal catastrophe expressed lyrically." In less than a decade, Ellison would rise up as one of the key voices of his own literary moment, capturing and laying bare in Invisible Man the anger and pain experienced in his community as the U.S. continued its battle over Civil Rights. Very Good. (Inventory #: 3193)
$2,500.00 add to cart or Buy Direct from
Whitmore Rare Books
Share this item

The Patriarchal Institution, As Described by Members of its Own Family

New York : American Anti-Slavery Society , 1860
(click for more details about The Patriarchal Institution, As Described by Members of its Own Family)
View all from this seller>