McTEAGUE. A Story of San Francisco 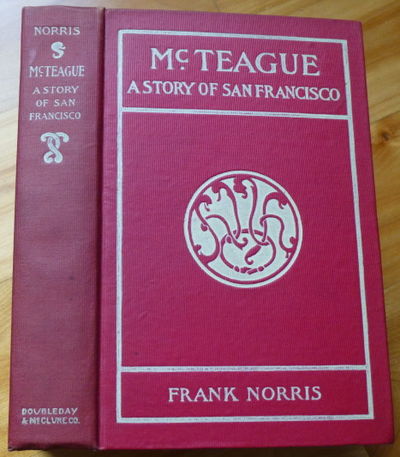 by Norris, Frank
1899. New York: Doubleday & McClure Co., 1899. 4 pp undated ads. Original red cloth decorated in white. First Edition (with the title page in a three-panel single line border, and with "moment." the last word on p. 106; copies of the revised second printing unfortunately get mistaken as first editions). This copy is in the third and usual state, with signature-25 in proper sequence (some copies got out with a binding error). Frank Norris's masterpiece is McTEAGUE. It is the most purely Zola-esque novel in English, with its cold, careful study of the growing devastation wrought by miserliness on the lives of the Polk Street dentist and his wife. As a motion picture, under the name of "Greed," it was almost equally effective, and gave Zasu Pitts almost her only opportunity as a tragedian. [K&H] Though the tale's end has been criticized as melodramatic, it is not easy to forget the final scene in which McTeague, fleeing after murdering his wife, stands handcuffed in Death Valley to the pursuer whom he has just killed -- awaiting starvation. McTEAGUE was bound in red cloth that unfortunately was stamped in white pigment rather than gilt. This white pigment has proven, over the past century, to flake away notoriously: many copies now are missing much of this stamping, and many have spines that have become totally illegible. This copy is an unusual survivor, with all of the white pigment present; the volume is near-fine (spine slightly faded as usual, front endpaper just cracking). Housed in an open-back slipcase. Blanck 15031; McElrath A3.1.a.1; Zamarano 58; a Johnson High Spot. (Inventory #: 14445)
$775.00 add to cart or Buy Direct from
Sumner & Stillman
Share this item

1916
(click for more details about LETTERS FROM AMERICA. With a Preface by Henry James)