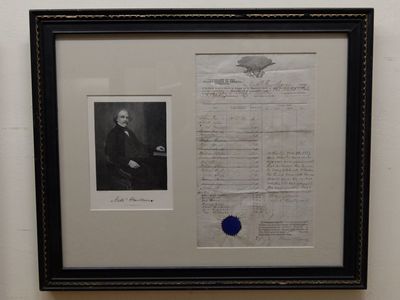 by HAWTHORNE, Nathaniel (1804-1864)
Liverpool, 1857. unbound. very good. Twice-signed partly printed document, "Nath'l Hawthorne", a Departure Record, 8.5" x 14", as Consul of the United States of America, Liverpool, March 14th 1857, with Consular embossed paper seal still attached, certifying that "the Seamen or Mariners hereinto described at this Port, to proceed on voyage to the United States, on board the Mary E. Bales, of Boston, as appears by the declaration of J.J. Woodbury, Master of the Ship". The manifest passport then lists all nineteen seamen aboard the ship including their monthly wages noting that each is a citizen of the United States of America, of which Hawthorne duly notes by signing the affidavit: "I have hereunto set my hand and affixed the Seal of the Consulate of the United States at Liverpool - aforesaid, this 14th day of March in the Year of our Lord - One Thousand Eight Hundred and Fifty-Seven". Three days later an unexpected emergency arose and Captain Woodbury most likely had to call upon Hawthorne at this private quarters at a most unreasonable hour as seven American seamen deserted his ship causing it to be undermanned and forced to remain in port. Without the services of his secretary, Hawthorne resolves the emergency by completely amending the document in his hand, in full: "On this 17th of March 1857 said Master appeared before me and made oath that: James Francis, Theo Harrison, Joseph Jockey, W.H. Carrol, Theo Prince & Marriott Barnes deserted since the 14th instant - and that he has shipped the seven persons last entered annexed list in their places, signing Nath'l Hawthorne". In addition, Hawthorne also amends the manifesto passport by crossing off the names of the deserters and adding the names of the new recruits, noting that they are citizens o the United States. Set into a beige matte with two openings, accompanied by an exquisite engraving by Timothy Cole, of a photograph taken by John J.E.P. Mayall in 1860, and expertly placed in a black wooden frame with gold border to 24" x 20". Condition: on the document, there is a minor tape stain that is far from Hawthorne's text and signatures that does not detract from the document. The frame's carved gold decorative border is chipped along its top and bottom edges with small pieces missing. *Hawthorne signed ship documents with content and containing his extensive holograph amendments with multi-signatures rarely comes to market. American author best remembered for such classics as Twice Told Tales, The Scarlet Letter, and The House of the Seven Gables. (Inventory #: 293665)
$1250.00 add to cart or Buy Direct from
Argosy Book Store
Share this item

History of the Discovery of America; of the landing of our forefathers at Plymouth, and of their most remarkable engagements with the Indians in New-Englannd [sic], from their eirst landing in 1620, until the final subjugation of the natives in 1679. To which is annexed the particulars of almost every important engagement with the savages at the wesward to the present day. Including the defeat of generals Bradock, Harmer, and St. Clair, by the Indians at the westward; the Creek and Seminole war &c By a Citizen of Connecticut