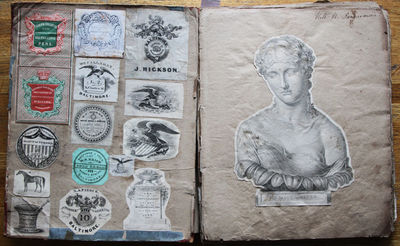 by Bannerman, William W.
Quarto, commercial notebook 54 leaves of heavy brown paper, each leaf, often both recto and verso, as well as front and rear pastedowns, are mounted with examples of Bannerman's work, proof copies, steel engravings, drawings, watercolors and miscellaneous material executed by Bannerman. Accompanied by a sheet of paper seal impressions of the designs of Edward Stabler (1794 -1883). Bannerman has signed the book at least three times: once on the cover and again on the free endpapers. Original three-quarter leather over blue paste paper boards. The front board bears the following inscription: Wm. W. Bannerman. Specimen Book". Heavy wear to the binding; hinges broken; block broken; some pages are loose.
Bannerman's personal record – kept as a scrap book – of his accomplished work seemingly encompassing his entire working life in Baltimore. The album consists of mounted examples ranging from book illustrations, commercial labels, cards, steel engravings, woodcuts, printed ribbons, an occasional typeface sample, and proof copies. The examples are mounted to the pages of the notebook in random fashion. Most are identified with Bannerman's name in the illustration. There are also a small number of original drawings and watercolors. Additionally, the volume contains drawings and several proofs of engravings by Bannerman's son John B. Bannerman. The volume also includes a sample page of an entirely engraved, illustrated writing manual, which appears to be unknown.
William W. Bannerman, engraver, William Bannerman was a partner in the Baltimore firm of Medairy & Bannerman c. 1827-31; he appears to have worked on his own in Baltimore after that, his best known work being a series of engraved portraits of American statesmen for the U. S. Magazine and Democratic Review, 1840-45. Bannerman died about 1845/45, leaving his widow, who kept a fancy and household goods store for some years, and a son John B. Bannerman, who carried on the engraving business at the same address. Baltimore City Directories 1827-51; Stauffer, I, 14." Groce-Wallace, Dictionary of Artists in America 1564-1860, p. 26-27
"John B. Bannerman, engraver, probably the son of William W. Bannerman, engraver of Baltimore. He was working in Baltimore 1849-53 and in San Francisco 1856-60. Baltimore Business Directory 1849, 1851, 1853; San Francisco Business Directory and City Directory, 1856, 1858-60." Groce-Wallace, p. 26" (Inventory #: 30840)
$4000.00 add to cart Available from
Michael Brown Rare Books
Share this item
Michael Brown Rare Books
Offered by