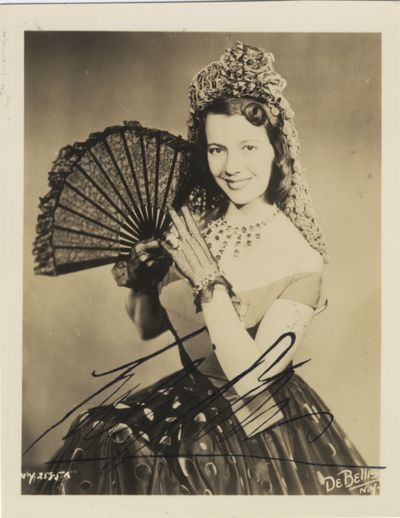 signed
by PONS, Lily 1898-1976
Ca. 126 x 98 mm. From the collection of the distinguished American mezzo-soprano Marilyn Horne (b. 1934). "[Pons] made her operatic début in 1928 at Mulhouse as Lakmé, with Reynaldo Hahn conducting. She then sang in French provincial houses as Gretel, Cherubino, Blonde, the Queen of Night and Mimì. On the recommendation of Zenatello, she went to the Metropolitan, making her début in 1931 as Lucia... Married to André Kostelanetz from 1938 to 1958, she made her stage farewell at the Metropolitan in 1958 as Lucia. Pons possessed a pure, agile, high coloratura voice, as can be heard on her many recordings." Dennis K. McIntire, revised by Alan Blyth in Grove Music Online. "Horne had a voice of extraordinary range, rich and tangy in timbre, with a stentorian chest register and an exciting top... In concert she once achieved the feat of singing in a single programme Rossini arias and Brünnhilde's Immolation Scene, proof of her exceptional versatility. Throughout her lengthy career she was an admired recitalist, singing lieder, mélodies, Spanish and American songs with equal aplomb." Alan Blyth in Grove Music Online. (Inventory #: 31501)
$44.00 add to cart or Buy Direct from
J. & J. Lubrano Music Antiquarians
Share this item