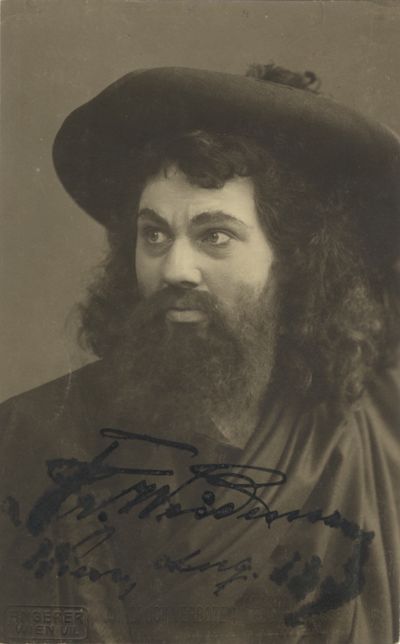 by WEIDEMANN, Friedrich 1871-1919
Studio of Angerer in Vienna. With blindstamps of Magasin Metropole and Angerer to lower margin of recto. From the collection of the distinguished American mezzo-soprano Marilyn Horne (b. 1934); previously in the collection of Walter Honig. Slightly worn and soiled; date smudged. German baritone Friedrich Weidemann joined the Vienna Court Opera in 1903 at the invitation of Gustav Mahler. He sang the premiere of Kindertotenlieder (1905), which became one of his signature pieces. His opera roles ranged from Mozart to Wagner to Strauss. The Honig family emigrated from Vienna to England in September of 1938 and then to the United States in 1939. The family papers are held at the Holocaust Museum in Washington, D.C. "Horne had a voice of extraordinary range, rich and tangy in timbre, with a stentorian chest register and an exciting top... In concert she once achieved the feat of singing in a single programme Rossini arias and Brünnhilde's Immolation Scene, proof of her exceptional versatility. Throughout her lengthy career she was an admired recitalist, singing lieder, mélodies, and Spanish and American songs with equal aplomb." Alan Blyth in Grove Music Online. (Inventory #: 31802)
$33.00 add to cart or Buy Direct from
J. & J. Lubrano Music Antiquarians
Share this item