Fine original drawing in pencil of a costume design for the character of Tancredi in Rossini's eponymous opera. Executed for a production in Aix-en-Provence in 1981 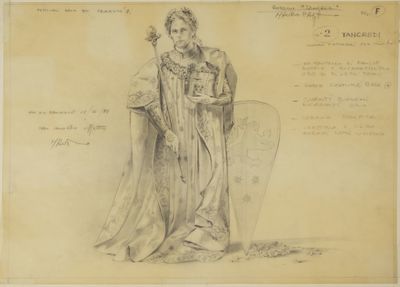 signed
by PAGANO, Mauro 1951-1988
330 x 450 mm. In pencil on heavy onionskin drafting paper. A detailed full-length depiction of Tancredi in ceremonial attire, holding helmet and scepter, with shield in background. Dated "Aix en Provence 18/7/81 con molto affetto" and signed "M Pagano" at left, with description of costume to right. From the collection of the distinguished American mezzo-soprano Marilyn Horne (b. 1934). Slightly browned; taped to mount at center of upper and lower margins and at corners; small tear to upper right, just touching one word of text. Tancredi was first performed in Venice at the Teatro La Fenice on February 6, 1813. The Aix-en-Provence production starred Marilyn Horne, Katia Ricciarelli, Dalmacio González, and Nicola Zaccaria. Although the untimely death of designer Mauro Pagano cut short his promising career, many of his costume and set designs continue to be used in productions around the world. An exhibition of his work was held in Mantua in 1998, and a catalog issued in that same year. "Horne had a voice of extraordinary range, rich and tangy in timbre, with a stentorian chest register and an exciting top... In concert she once achieved the feat of singing in a single programme Rossini arias and Brünnhilde's Immolation Scene, proof of her exceptional versatility. Throughout her lengthy career she was an admired recitalist, singing lieder, mélodies, Spanish and American songs with equal aplomb." Alan Blyth in Grove Music Online. (Inventory #: 31383)
$1,045.00 add to cart or Buy Direct from
J. & J. Lubrano Music Antiquarians
Share this item