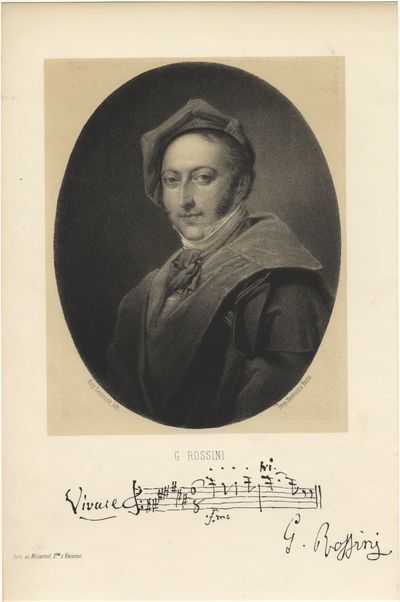 by ROSSINI, Gioachino 1792-1868
Paris: Bertauts, 1900. Image size 170 x 135 mm, sheet size 275 x 190 mm. Bust length, with large collar and cap, looking forward; oval on beige background. With facsimile musical quotation and signature below image. Originally published in the journal Le Ménestrel. From the collection of the distinguished American mezzo-soprano Marilyn Horne (b. 1934). Slightly worn and browned at edges; hinge mount to verso. Béraldi IX, p. 117. Weinstock, p. 88. "No composer in the first half of the 19th century enjoyed the measure of prestige, wealth, popular acclaim or artistic influence that belonged to Rossini. His contemporaries recognized him as the greatest Italian composer of his time. His achievements cast into oblivion the operatic world of Cimarosa and Paisiello, creating new standards against which other composers were to be judged. That both Bellini and Donizetti carved out personal styles is undeniable; but they worked under Rossini's shadow, and their artistic personalities emerged in confrontation with his operas. Not until the advent of Verdi was Rossini replaced at the centre of Italian operatic life." Philip Gossett in Grove Music Online. "Horne had a voice of extraordinary range, rich and tangy in timbre, with a stentorian chest register and an exciting top... In concert she once achieved the feat of singing in a single programme Rossini arias and Brünnhilde's Immolation Scene, proof of her exceptional versatility. Throughout her lengthy career she was an admired recitalist, singing lieder, mélodies, Spanish and American songs with equal aplomb." Alan Blyth in Grove Music Online. (Inventory #: 31427)
$66.00 add to cart or Buy Direct from
J. & J. Lubrano Music Antiquarians
Share this item