Mr. Tenducci." Fine large mezzotint engraving of the noted Italian soprano castrato and composer by J. Finlayson after the painting by J. Bruscett. The singer is depicted seated, holding a sheet of printed music from the "Water Parted from the Sea. 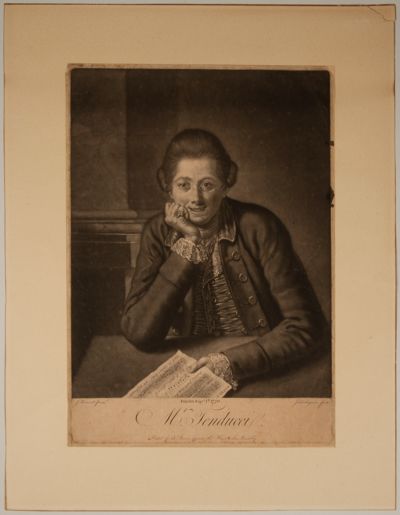 by TENDUCCI, Giusto Ferdinando ca. 1735-1790
[London]: T. Bowen, 1770. 354 x 251 mm plus narrow margins. Some wear, browning, foxing, and creasing; early paper repairs to edges; minor stains to right margin, just extending into printed area. From the collection of the distinguished American mezzo-soprano Marilyn Horne (b. 1934). Highfill et al, pp. 397-398, no. 2. Chaloneer Smith: British Mezzotints, 1883, 16.1. Tenducci "made his début in Cagliari in 1750, during the wedding festivities of the Duke of Savoy. After appearing both in minor roles and in comic opera in Milan, Naples, Venice, Dresden and Munich, in 1758 he went to London, where he spent two seasons at the King's Theatre... He visited Dublin in 1765 and the following year (despite some scandal) married Dora Maunsell, the daughter of a Dublin lawyer. Her relations were outraged; Tenducci was jailed and his wife kidnapped... Impressed with 'Scotch' songs, he persuaded his friend J.C. Bach to arrange some for insertion into English operas... Smollett described his voice as particularly lyrical and the ABCDario Musico (Bath, 1780) compared him with Gioacchino Conti." Roger Fiske and Dale E. Monson in Grove Music Online. Tenducci starred in the premieres of Gioacchino Cocchi's Ciro riconosciuto (1759), Thomas Arne's Artaxerxes (1762), and J.C. Bach's Adriano in Siria (1765). "In August 1778 Mozart wrote to his father from St. Germain, speaking of the arrival in Paris of Bach and Tenducci and explaining that he wrote in haste because he had to compose, in three days, a "scena" for Tenducci to be performed by the orchestra of the Maréchal de Noailles at his palace in St. Germain." Highfill p. 397. "Horne had a voice of extraordinary range, rich and tangy in timbre, with a stentorian chest register and an exciting top... In concert she once achieved the feat of singing in a single programme Rossini arias and Brünnhilde's Immolation Scene, proof of her exceptional versatility. Throughout her lengthy career she was an admired recitalist, singing lieder, mélodies, Spanish and American songs with equal aplomb." Alan Blyth in Grove Music Online. (Inventory #: 31504)
$715.00 add to cart or Buy Direct from
J. & J. Lubrano Music Antiquarians
Share this item