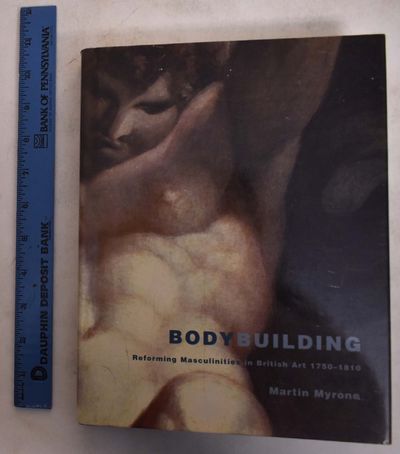 by Myrone, Martin
New Haven, Conn/London: Yale University Press, 2005. Hardcover. VG/VG (slight shelf wear to dust jacket, price label inside front cover). Gray cloth boards with black lettering, illustrated dust jacket, 384 pp, profusely illustrated in color and bw illustrations. "The heroic male body underwent a radical transformation in late eighteenth-century British art. This study follows that transformation, in a discussion that focuses upon a period in which a modern art world was established, taking into account the lives and careers of a succession of major figures - from Benjamin West and Gavin Hamilton, to Henry Fuseli, John Haxman and William Blake - and influential institutions, from the Royal Academy through to the commercial galleries of the 1790s. Organised around the historical traumas of the Seven Years War (1750-63), the Wars of American Independence (1775-83) and the French Revolution and Revolutionary Wars (1789-1815), Bodybuilding places the visual representation of the hero at the heart of a series of narratives about social and economic change, gender identity and the transformation of cultural value on the eve of modernity." "Combining visual analysis, social history and masculinity studies, Bodybuilding effects a vivid image of this critical period in Britain's cultural history and establishes on ambitious new framework for the study of late eighteenth-century art and gender."--Jacket. Includes bibliographical references (pages 315-373) and index. (Inventory #: 174078)
$45.00 add to cart or Buy Direct from Mullen Books
Share this item