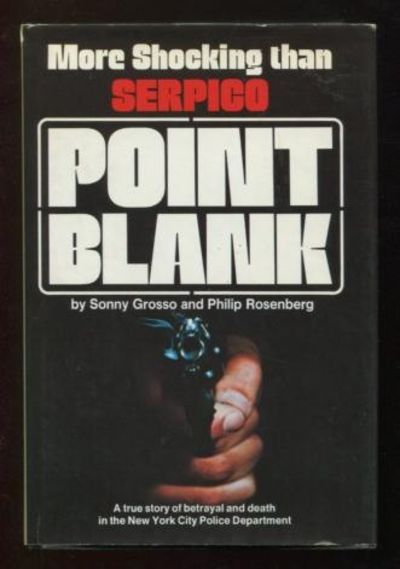 by Rosenberg, Philip, and Sonny Grosso
New York: Grosset & Dunlap. Very Good+ in Very Good+ dj. 1978. First Edition. Hardcover. 0-448-14547-2 . [minor shelfwear to bottom edges, light spotting/foxing to top of text block; jacket shows some surface rubbing, light wear at spine extremities, one tiny closed tear at bottom edge of front panel]. INSCRIBED with a humorous bit of doggerel ("To my pal ___ / Roses Are Red / Besides my Good Looks / How Lucky we are / For All These Crooks!!") and SIGNED by co-author Grosso on the ffep; the inscribee (the book's previous owner) has added a note at the bottom of the page, documenting the inscription/signing as having taken place at Joe Tecce's Restaurant in Boston in 2001. One-half of the real-life "French Connection" detective duo here "offers a previously unseen view of the police underworld," based on "a true story of betrayal and death" from the annals of the NYPD in the early 1970s. It's cover-blurbed as "More Shocking than SERPICO," and the authors state in their Preface that although they've dramatized some scenes and supplied dialogue where their "sources and research did not disclose the actual words spoken," and have chosen to present their story "in the form of a novel," that it is nonetheless "not a work of fiction." Pretty much everything about the book's presentation suggests that it's a movie waiting to be made -- especially given that Grosso had retired from the NYPD a couple of years before and had set up shop as a film/TV producer -- and by golly if it wasn't, albeit as a TV-movie, under the title A QUESTION OF HONOR, in 1982. (As a title, of course, POINT BLANK was already associated with one of the great crime thrillers of the era.) The hardcover edition of this book is surprisingly scarce, and signed copies very uncommon. . (Inventory #: 24932)
$200.00 add to cart Available from ReadInk
Share this item
ReadInk
Offered by

El Raisuni, The Sultan of the Mountains: His Life Story, as told to Rosita Forbes

by Forbes, Rosita (as told to)