On the Trail of a Spanish Pioneer | The Diary and Itinerary of Francisco Garces (Missionary Priest); In His Travels Through Sonora, Arizona, and California 1775-1776 | Translated from an official contemporaneous copy of the original Spanish manuscript, and edited, with copious critical notes 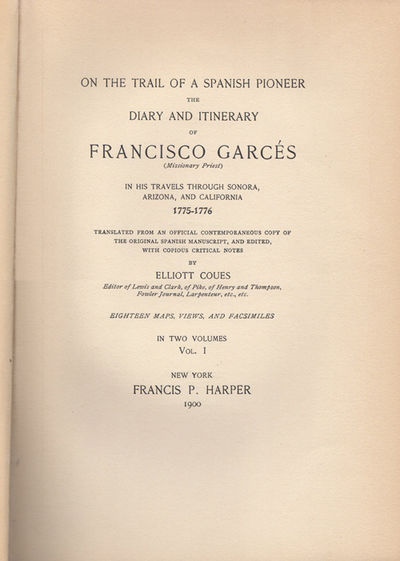 by Coues, Elliott [Trans/Ed.]
New York: Francis P. Harper, 1900. First Edition. Near Fine. limited to 950 copies with this #248, in Two Volumes [6.5x9.25"]; Dark blue cloth covers with blind line borders on covers and gilt lettering on spine; Vol. I - xxx, 312 pp., Frontispiece facsimile map [Font, 1777], 8 facsimiles, images and map, Vol. II - vii, 313-608 pp., frontispiece image and 10 images and map; Minor shelf wear with bumped corners and slight soiling and darkening to covers, text block tight with Pacific Union Club bookplate and ink stamp of presentation by Albert H. Payson on front end papers in both volumes, stamp of D.P. Elder and Morgan Shepard, book sellers and publishers on lower inside rear cover. [Cowan II 228]. Francisco Garces (1738-1781) was a Spanish Franciscan Friar that served as a missionary and explorer in the southwest. Garcés became a key player in this effort, conducting extensive explorations in the Sonoran, Colorado, and Mojave Deserts, the Gila River, and the Colorado River from the Gulf of California and Lower Colorado River Valley to the Grand Canyon. This account is from his participation in the 1775-76 Anza Colonizing Expedition, which extended in to northern California.This book was part of the Albert Payson (1847-1930) collection that was willed to the Pacific-Union Club, a San Francisco gentlemen's club, which he was President of in 1911-12. Payson was a captain in the Army Corp of Engineers and conducted many surveys and managed projects in the Southwest. (Inventory #: 13066)
$380.00 add to cart Available from
David Spilman Fine Books
Share this item