The Cattle on a Thousand Hills; Southern California 1850-1880 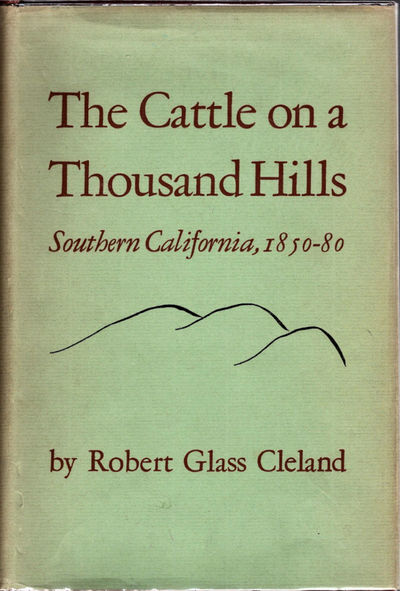 by Cleland, Robert Glass
San Marino, CA: The Huntington Library - The Ward Ritchie Press, 1951. Second Edition. Near Fine/Near Fine. Inscribed by Author, [9.25x6.25in]; xvi, 365 pp., 20 illustrations, facsimiles and map, index; Dark maroon cloth covers with gilt lettering and decorative rules on spine, all edges trimmed; Light green dust jacket with dark red lettering and black illustration of hills on front, black lettering on spine, summary on back; Minimal shelf wear to book with wear of small chip in cloth on bottom edge, inscription in ink "To Ralph Bieber, With my good wish and sincere friendship. Robert Cleland, January 16, 1953" on front end paper; Minimal shelf wear to dust jacket with age toning to edges and darken spine. [Adams (Six-Guns and Saddle Leather) 439, Zamorano Select 16A]. The second edition, includes corrections and a new chapter on development from 1870 to 1880. Footnote were moved to the end, the Appendix expanded, and a bibliography and illustrations were added. The book includes narratives on the outlaws of Murieta and Vasquez, and an account of Juan Flores in the appendix. The early days of Southern California were know for extensive cattle rustling and other similar activities.Ralph P. Bieber (1894-1981) was a historian of the American West and was an editor for the Southwest Historical Series published by Arthur H. Clark and for the Huntington Library. He edited the 'Southern Trails to California in 1849' that was well researched and included in Carl Wheat's 'Books of the Gold Rush'. (Inventory #: 13708)
$161.00 add to cart Available from
David Spilman Fine Books
Share this item