Take your Bible in One Hand; The Life of William Henry Thomes Author of a Whaleman's Adventures on Land and Sea, Lewey and II, the Bushranges, A Gold Hunter's Adventures, Etc. 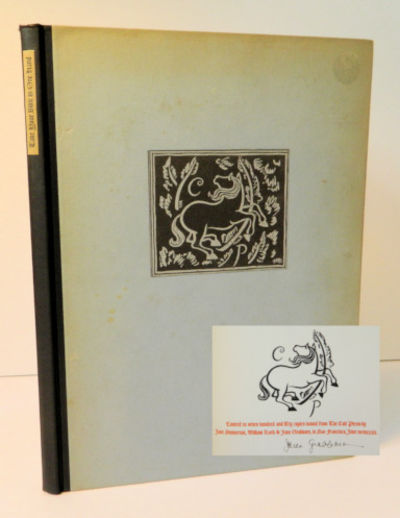 by Stewart, George R.
San Francisco: The Colt Press - Jane Grabhorn, 1939. First Edition. Very Good. Mallette Dean. Signed by Jane Grabhorn, limited to 750 copies, with Prospectus, [11.5x8.5in]; 67 pp., [1] colophon; Light blue paper covers with black cloth backstrip, black lettering on spine label and Colt Press illustration by Mallette Dean on black and gray label on front, top edge trimmed and all others untrimmed, title page in black and red lettering with illustration, illustrations in margins throughout, tipped in four page red and black prospectus; Some shelf wear to covers, edges and corners, age toned edges, minor soiling to covers, faint remains of adhesive stamp on front, spine label darken, prospectus folded for mailing with canceled stamp and hand addressed to "Mr. Frank Schwabacher" at the famed Russ Building in San Francisco. William Henry Thomes (1824-1895) was an adventurer, author and publisher. This is a short book from his works and the Bancroft Library archives relating to two trips to California. The first trip was in 1843 as a sailor on the trade ship "Admittance" for California hides. His descriptions published in "On Land and Sea" (1883) of Monterey, Yerba Buena (San Francisco) and the country before the American conquest were similar to Richard Henry Dana's experience related in "Two Years before the Mast". He deserted the "Admittance" and wandered California until 1846, when he signed on another ship for Boston. His second trip to California was spurred by the discovery of Gold and he participated in a mining company sailing on the "Edward Everett" for California in 1849. He stayed until 1851 and sailed back to Boston by way of Hawaii and and extended period in the Australian Gold Rush.The title of this book comes from the advise the miners were given in Boston, "You are going to a strange, wild, and immoral country, ... Take your Bible in one hand and your great New England Civilization in the other!". Stewart rephrased the sentiment as "... with their New England shotguns in one hand and their great hopes of sudden wealth in the other, they set forth."Jane Bissell Grabhorn (1911-1973) was a bookbinder, printer and publisher. Her short lived Colt Press (1938-1942) was known for its unique typography and book design. The war forced the closing and Jane went back to work with her husband at the Grabhorn Press. She went on to produce many titles with the Colt Press imprint. This book was her 5th one that also used Mallette Dean as the illustrator and first time use of his artwork of the Colt Press device (#607 and #608 of Mallette Dean, A Printmaker and His Art, John T. Hawk, Book Club of California, 2018, (Inventory #: 13718)
$86.00 add to cart Available from
David Spilman Fine Books
Share this item