The Tragedy of the Italia; With the Rescuers to the Red Tent [The expedition and crash of General Umberto Nobile North Pole flight in the Dirigible "Italia"] 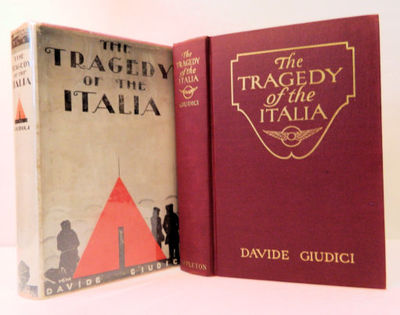 by Giudici, Davide
New York: D. Appleton and Company, 1929. First Edition, 1st Printing. Very Good/Very Good. [8.5x6in]; xv, [1], 207 pp., [1], 33 plates with images including frontispiece image of Soviet Russian Icebreaker "Krassin" at Nobile's Red Tent; Maroon cloth covers with gilt lettering and design on spine and front, all edges trimmed; Gray and white dust jacket with black and white lettering on spine and front, illustration of rescuers and red tent on front and spine, advertisements on back; Negligible shelf wear to covers, edges and corners, minor foxing spots to end papers, title page and all edges, occasional foxing spots and age toned on other pages and some plates, bookseller stamp on back end paper; Some shelf wear to dust jacket along all edges and corners, small chips to top and bottom of spine and small closed tear on top back edge, some minor rubbing and soiling to covers. [Arctic Biblio 5776]. Umberto Nobile (1885-1978) was an Italian aviator, engineer and Arctic explorer. In the 1920's there were great advances in airplane and lighter-than-Airship design and exploration by air of the Polar Regions. Roald Amundsen sought out Nobile to design an airship for Arctic exploration and fly over the North Pole. In April 1926, the "Norge" arrived at Svalbard to prepare for the flight, only to find Richard Byrd's airplane expedition also preparing to fly to and from the North Pole. Byrd's flight on May 9th claimed to have reached the North Pole, but has been later challenged. Amundsen and Nobile, continued their flight to the North Pole and across the Arctic to Alaska. The "Italia" was a similar airship to the "Norge", and Nobile embarked on another Siberian Arctic and North Pole expedition in May 1928. After crossing the North Pole, the airship crashed in a storm less than 13 miles from Svalbard. When the gondola impacted the ice most of the crew were injured and thrown out. With out the weight, the still intact envelope soared away with six crew member still inside. From the Dust Jacket, this book is about "... the first complete account of General Nobile's flight ... " and the rescue. It was written by an Italian journalist that was aboard the Soviet Russian Icebreaker "Krassin" and was an international story. With much controversy and conflicting survivor stories. Roald Amundsen (1872-1928) was part of the Norwegian flying boat rescue mission in search of the missing members of the Italia. The plane, with five other members, disappeared and assumed crashed in the Barents Sea in June 1928. (Inventory #: 13698)
$275.00 add to cart Available from
David Spilman Fine Books
Share this item