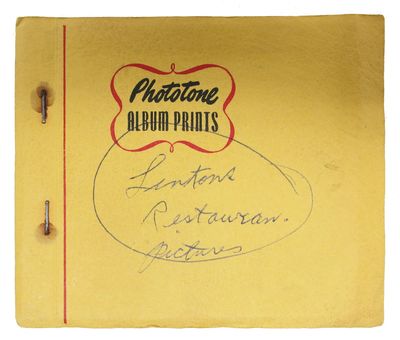 A snapshot portrait of the staff, customers and interior of a Linton's Restaurant, presumably one of the many located in Philadelphia. The images depict white & African-American staff in uniform while at work.... behind the long food counter, sitting/standing together [on a coffee break?], washing dishes, & cooking; a man in a suit who appears in two photos [the owner?]; and a few rather hazy shots of the restaurant's seating area. The lot, no doubt, taken by an amateur photographer, although one perhaps known to those photographed, given the latter's generally relaxed & casual appearance.Linton's was a well-known chain of Philadelphia diners nearly from its founding in 1890 until 1981, when it became Linton's Food Management Services and closeded its restaurants. Linton's claimed the distinction of being the first air conditioned restaurant in Philadelphia, in 1898, and in 1932 became the first to install a restaurant conveyor belt to transport food from the kitchen to the counter. By 1940, there were over 40 Linton's Restaurants operating in Philadelphia, Camden and Atlantic City. (from the Linton's website)A nice primary visual source documenting one of Philadelphia's now-defunct blue-collar dining establishments, as it appeared ~ 60 to 70 years ago. (Inventory #: 48079)
$150.00 add to cart or Buy Direct from Tavistock Books
Share this item

Chicago : Published by The Hotel Monthly Press , 1930
(click for more details about The EDGEWATER SANDWICH BOOK; With Chapters on Supremes, Hors d' Oeuvres, Garnitures, Relishes and Flavored Butters)
View all from this seller>