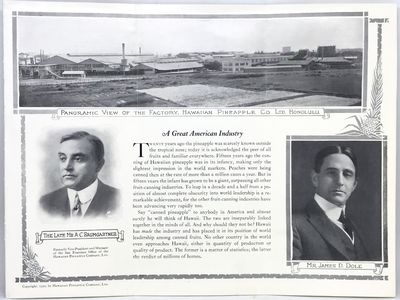 by Hawaiian Pineapple Co. Ltd.
Bonine, 1922. Staplebound. Color illustrated tri-fold pamphlet. Very good. This oversized pamphlet documents The Hawaiian Pineapple Co. Ltd., in 1922, as imagined by it's original architect, James D. Dole. This tri-fold brochure contains photo illustrations along with descriptions of the history and development of the pineapple industry in Hawaii. Photos include: Panoramic View of The Factory, Planting the Fields, The Harvest, The Railroad's Part, The Trimming and Packing Tables, Machines Capable of Sealing a Million Cans Per Day, Motor Traction, The Labels, The Cafeteria of The Hawaiian Pineapple Company, Ltd., Where Women Employees May Rest, The Baseball Team, and many more. Interior cover layout features photo portraits of "Mr. James D. Dole" and "The Late Mr. A.C. Baumgartner" - A.C. Baumgartner was employed by The Hunt Brothers Company, an early California fruit-packing and cannery establishment, and is listed in this pamphlet as "Formerly Vice-President and Manager of the San Francisco Office of the Hawaiian Pineapple Company, Ltd."In 1899, James D. Dole made his way to Hawaii with the intention of growing coffee but decided to focus on pineapples and planted 75,000 pineapple slips on his twelve acres of land. Knowing the risks of transporting this fruit, Dole started a small cannery. Critical financial support came from San Francisco's Hunt Brothers as well as family and friends back in his hometown of Boston. In 1911 Dole hired Henry G. Ginaca, chief draftsman of the Honolulu Iron Works, and by 1913 Ginaca had invented and perfected a machine (photo illustrated in pamphlet) that could core and peel 35, and eventually, 100 pineapples-per minute. Dole, a son of a preacher, felt the need to create a home for his workers. In 1922, the company purchased the island of L nai, and built the plantation village of L nai city to house Dole's plantation employees. Within its boundaries were schools, churches, playgrounds, baseball fields, a swimming pool, tennis courts, an auditorium, a cinema, and radio telephones. By the early 1920's, the company put in place a workman's compensation plan, a pension plan, and stock ownership. By the early 1930's, James D. Dole became a minority shareholder in his company, with Castle & Cooke, a sugar company, taking the majority, which in turn brought to an end Dole's involvement in the company. Light rubbing to folds, otherwise a remarkably clean copy. (Inventory #: 2051)
$225.00 add to cart Available from
lizzyoung bookseller
Share this item