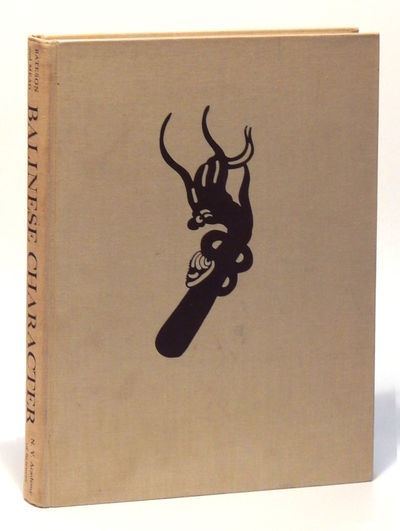 by Bateson, Gregory and Margaret Mead
New York: New York Academy of Sciences, 1962. Hardcover. Very good. Signed by Bateson, upside down on rear free endpaper. Second printing. Quarto (30 cm), pp. xvi, 277. Beige cloth with brown Balinese motif, no jacket as issued. Includes 100 black and white plates with detailed descriptions. Rear board has brown spotting, boards with light wear to extremities, front free endpaper with faint foxing. Content based on Bateson and Mead's work in Bali from 1936 to 1939 (a period which included their marriage to one another), studying the connections between culture and personality.Though this volume represents Bateson's early work in anthropology, his thinking and writing crossed genres and fields, and he eventually became influential in psychology, biology, and cybernetics, and applied principles from these disciplines to modern environmental crises. Bateson signatures are rare in the trade.From the collection of Canadian grizzly bear biologist Barrie Gilbert, whose unfortunate claim to fame was an encounter with a grizzly in Yellowstone early in his career that left him with one good eye and an impressive set of scars. (Inventory #: 28343)
$300.00 add to cart Available from Elk River
Share this item

Black and white photos of Western US vacation

Waco, TX : Word Books , 1978
(click for more details about Soul on Fire)
View all from this seller>