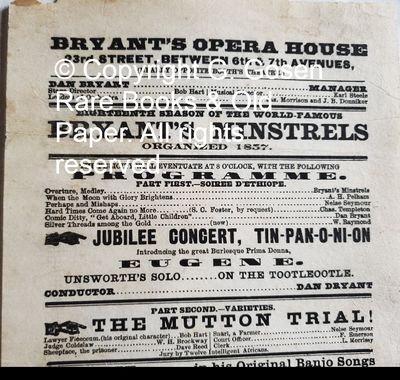 by Bryant, Dan
Bryant's Opera House 23rd Street, Between 6th & 7th Avenues, (Nearly Opposite Booth's Theatre.) Eighteenth Season of the World-Famous Bryant's Minstrels Organized 1857. The Felicity Will Eventuate at 8 O'Clock, With the Following Programme. Part First.—Soiree d'Ethiope. Jubilee Concert, Tin-Pan-O-Ni-On Introducing the Great Burlesque Prima Donna EUGENE. Part Second. --- Varieties. The Mutton Trial! Unsworth in His Original Banjo Songs. Fooling With the Wrong Man! Violin Solo, "The Dream," Descriptive of a Person Dreaming of Music, J. B. Donniker. The performance will conclude with Unsworth and Eugene's Spectacular Fairy Burlesque Opera of CINDERELLA OR THE FAIRY AND THE LITTLE GLASS SLIPPER. Broadside, 30 cm x 15 cm. Dan Bryant, manager, Bob Hart, Stage Director, Karl Steele, Musical Director. New York: Printed by Metropolitan Job Printing and Engraving Establishment, Herald Building, Broadway and Ann St., N.Y. [1875].
Enormously popular in New York City, Dan Bryant became a famous blackface performer in the 1860s for his pejorative representations of "the negro peculiarities," which were recorded during the Civil War as "extravagant caricatures" of normal behavior by Union Army correspondents who observed African-American people for the first time during the war, rather Dan Bryant's impersonations of African-American people were representative of how he thought they should act and behave. (See: The Journal of the Civl War, Vol. 4, Number 4, December 2014, Peter C. Leubke, "Equal to Any Minstrel Concert I Ever Attended at Home," Union Soldiers and Blackface Performance in the Civil War South," p.527.) (See also: Bryant's Power of Music; Being a Collection of All the Latest and Best Sentimental and Negro Songs, etc., as Sung by the Inimitable Bryant's Minstrels. New York: Robert De Witt, Publisher, Frankfort Street, 1867, p. vii.) Dan Bryant was the stage name of Dan O'Neill, one of three brothers, Jerry, Dan and Neil O'Neill, who performed as the Bryant Brothers.
Among the songs performed in 1875 at the event recorded on the broadside that are still heard today was Hart Pease Dank's "Silver Threads Among the Gold," (sung by W. Raymond) billed on this broadside as "new." Other songs offered as the Soiree d'Ethiope were: "When the Moon with Glory Brightens" (sung by A.H. Pelham); "Perhaps and Mishaps" (sung by Nelse Seymour); "Hard Times Come Again No More" (S.C. Foster, by request, sung by Chas. Templeton); a Comic Ditty, "Get Aboard, Little Children," sung by Dan Bryant.
"Unsworth" was James Unsworth (July 2, 1835 – February 21, 1875) joined Bryant's Minstrels in 1858. Unsworth left and rejoined Bryant's Minstrels several times, as he toured with other companies both in America and England. (See: Monarchs of Minstrelsy from "Daddy" Rice to Date by Edw. LeRoy Rice. New York: Kenny Publishing Company, 1911, pp. 107-108.)
Situated in what was known as "Satan's Circus," in the area between Fifth and Seventh Avenues from 23rd Street to 31st Street, Bryant's Opera House was opened in 1870 as one of the few remaining minstrel houses in Manhattan, home of the infamous blackface group Bryant's Minstrels, which were organized in 1857. This group enjoyed top billing as the main draw on this broadside with the first part of the program billed as Dan Bryant's "Soiree D'Ethiope."
The condition of this broadside is very good, having been expertly cleaned and tape stains reduced, washed to reduce acidity and sized with gelatin to restore crispness and resilience to the paper. Minor cracks on the top edge that were starting were mended on the verso and thereby arrested to prevent them becoming any larger. (Inventory #: 347)
$2,000.00 add to cart Available from
Gosen Rare Books
Share this item

Smith, Elder and Co., Cornhill. , 1832
(click for more details about The Comic Offering; or Ladies’ Melange of Literary Mirth, for MDCCCXXXII. Edited by Louisa Henrietta Sheridan.)

Eloisa en Dishabille: being a new version of that Lady’s Celebrated Epistle to Abelard. Ascribed to Professor Porson.

London printed in the year 1822.
(click for more details about Eloisa en Dishabille: being a new version of that Lady’s Celebrated Epistle to Abelard. Ascribed to Professor Porson.)
View all from this seller>