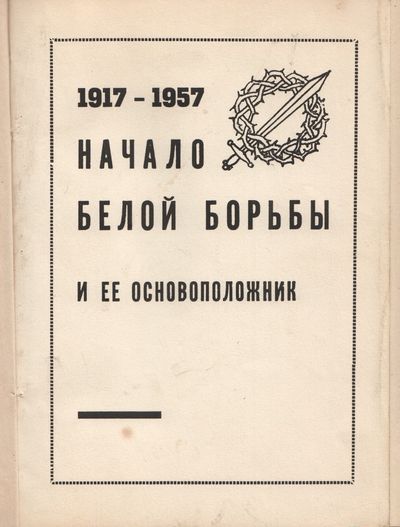 by Argentinskii otdel Russkogo Obsche-voinskogo soiuza [Argentine section of the Russian All-Military Union]
Buenos Aires: Izd. Argentinskogo otdela Russkogo Obsche-voinskogo soiuza, 1957. Octavo (19 Ã— 14). Modern quarter cloth over boards with original printed wrappers preserved; 117, [2] pp. Very good. This Ã©migrÃ© commemorative volume is dedicated to General Mikhail Alekseev (1857-1918), founder of the White resistance movement. The volume celebrates Alekseev's centenary and 40 years since the Bolshevik Revolution and the formation of the White Volunteer Army in November 1917. A veteran of the Russo-Japanese War of 1905 and WWI, Alekseev maintained close relations with the Czar Nicholas II serving as his Chief of Staff. In this capacity, after the February Revolution Alekseev, along with a number of other officials, advised the Czar to abdicate, advice which the Czar eventually followed. Subsequently Alekseev briefly and reluctantly operated under the Provisional Government. After the October Revolution he (along with General Kornilov) began to form the anti-Bolshevik Volunteer Army, which he led until his death in 1918. The pamphlet was printed by the Argentine section of the Russian All-Military Union, an Ã©migrÃ© military organization founded in 1924 by General Wrangel in Serbia, with the aim of connecting all Russian Ã©migrÃ© military personal in various countries. The organization, though anti-communist, tried to hold a neutral political position, uniting a variety of political opinions of more than one hundred thousand of its members. As such, this publication points out General Alekseev's "modest origins", highlighting the class diversity of the White movement. As of November 2019, KVK and OCLC show copies at Yale, Columbia, Oxford, NYPL, UNC Chapel Hill, Wisconsin, Alaska State Library, Utah, Berkeley, the Hoover Institution, and the British Library. (Inventory #: P003372)
$200.00 add to cart or Buy Direct from
Bernett Penka Rare Books
Share this item