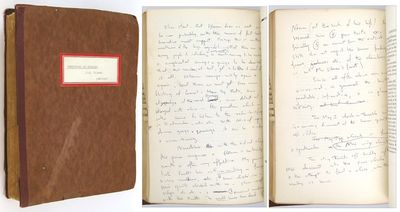 by ULLMAN, J.R. [James Ramsey]
(n.p.): J.P. Lippincott. (1964). An uncorrected proof, from galleys, of the official account of the 1963 American Mount Everest Expedition, led by Norman Dyhrenfurth, which put the first American -- Jim Whittaker -- on the summit (with Sherpa Nawang Gombu), via the South Col route pioneered by Edmund Hillary and Tenzing Norgay in 1953. This expedition also saw the first ascent via the West Ridge, by Will Unsoeld and Tom Hornbein. The expedition included 19 Americans, 37 Sherpas, and 907 porters and cost $400,000, as well as the life of John Breitenbach. Ullman was the official historian on the expedition, despite health problems keeping him in Kathmandu. This proof is 401 pages, printed on rectos only, with a typescript table of contents, in blue cardstock covers, further bradbound into brown covers with a typed title and author label applied. Each chapter and appendix has a hand-numbered tab. The appendices (labeled "Components") are written in part by expedition members, including Whittaker, Dyhrenfurth, and Hornbein, and cover all the facets of the climb, from cinematography and finances to glaciology and oxygen. This copy was apparently used by Woodrow W. Sayre for review in the New York Times, based on comments on both style and substance written throughout the text, as well as on two-full pages of a draft review on the verso of pages 291 and 292, that all correspond well to the published review. Sayre, a philosophy professor, had led a four-man, privately financed expedition to Everest in 1962, which was only the 13th attempt at the summit in history, and the first attempt without bottled oxygen: the team reached 25,500 feet. It's possible that Sayre added the outer covers and the tabs to this proof. The first "component" tab is near detachment; the outer covers are lose and worn. In all, a near fine proof in what appears to be a very good, homemade cover. A notable association copy of a rarity in mountaineering history. No Binding. Near Fine. (Inventory #: 034652)
$500.00 add to cart Available from
Ken Lopez - Bookseller
Share this item